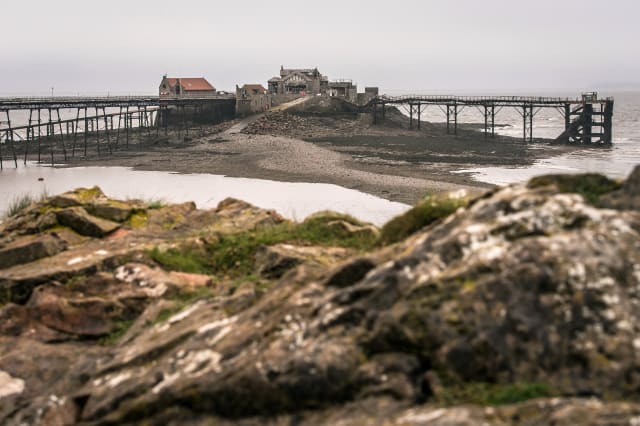 After years of decline, a historic Victorian pier could have a new owner.

The RNLI is planning to return to Weston-super-Mare’s Birnbeck Pier as part of a deal to safeguard the landmark’s future.

North Somerset Council has been working to draw up a compulsory purchase order for the derelict Grade II listed pier from its owner CNM Estates.

If the compulsory purchase order is approved, the council would purchase the pier and transfer ownership to the RNLI.

The pier, which was designed by engineer Eugenius Birch and built between 1862 and 1867, is unique as it is the only pier in the UK to connect the mainland to an island.

The privately-owned pier has continued to deteriorate over many years, moving onto Historic England’s national at-risk register in 1999.

Next month the council will receive a report to authorise the issuing of a compulsory purchase order for the pier, which could take up to 18 months to complete.

Council leader Don Davies said: “We are delighted that an organisation as professional as the RNLI has decided to step in and potentially take ownership of Birnbeck Pier.

“We have given the owner many opportunities over the years to undertake the necessary repairs needed to preserve the pier, without success, even starting legal action to compulsory purchase order the site as a last resort.

“This is a fantastic result following a great deal of work from council officers, Historic England and the RNLI.

“Clearly there is a lot of work to do to restore the pier and re-establish the lifeboat station back to its original home.

“We would like to thank Historic England for their ongoing support in securing a future for Birnbeck Pier and look forward to seeing this historic structure reopened to the public, as well as providing vital lifesaving to North Somerset.”

Duncan Macpherson, from the RNLI, said: “The charity has been working alongside North Somerset Council and Historic England on the feasibility of re-establishing a lifeboat station on Birnbeck Island and this is a significant step towards that goal.

“Weston-super-Mare is a very important search and rescue base for the RNLI but is also a very complex area in which to build a lifeboat station.

“Birnbeck Island offers the best solution for the safe and most effective launch and recovery for the volunteer lifeboat crew at all states of the tide.

“The move will be a significant investment for the charity and the future of lifesaving in Weston-super-Mare.

“Of course, the pier also has huge historical significance to the community of Weston-super-Mare and, although there are a number of challenges to overcome still, the RNLI are delighted to be part of the journey to bring it back to its former glory.”

The RNLI have had a presence on Birnbeck Island since 1882 but were forced to leave the island in 2014 due to the deterioration of the pier, which had become unsafe.

Bristol Channel has an extreme tidal range and at low tide the large mudflats that surround Weston are exposed, making the launch and recovery of a lifeboat difficult.

Birnbeck Island is surrounded by water at lower tide which improves the opportunity to launch and recover lifeboats.