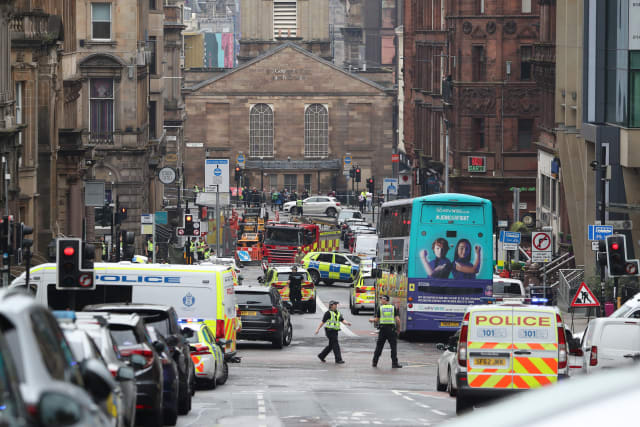 Police Scotland chief constable Iain Livingstone has paid tribute to the officer who was stabbed during a knife attack in central Glasgow.

Constable David Whyte, 42, was one of six people injured during the incident at the Park Inn Hotel in West George Street on Friday.

Police said a male suspect was shot dead by an armed unit and that the attack was not being treated as terrorism.

Paying tribute to his officers and those injured, Mr Livingstone said in a statement: “My thoughts and very best wishes are with those who have been injured and their families, including our colleague Constable David Whyte who was seriously injured in the course of doing his duty. I offer my personal support to all those affected.

“Officers have once again run into danger to protect their fellow citizens. Their professionalism as police officers was outstanding.

“I pay tribute to their bravery, selflessness and commitment to protecting the public.

“I briefed the First Minister and the Prime Minister earlier today on the circumstances and advised them both that we are not treating the attack as a terrorist incident.

“It is essential enquiries are now carried out to establish the full circumstances and all speculation must be avoided.”

The Scottish Police Federation (SPF) confirmed a male officer had been stabbed and his family had been informed.

Police Scotland said the officer was in a critical but stable condition.

All six injured people, including Mr Whyte, are being treated in hospital.

Police said there is no danger to the public, with officers in attendance in West George Street in the city centre on Friday afternoon.

A spokeswoman for campaign group Positive Action In Housing said the 91-room hotel was housing asylum seekers for the Mears Group, which moved them there during the coronavirus lockdown.

First Minister Nicola Sturgeon said: “First and foremost, my thoughts are with all those people who have been caught up in this terrible incident, particularly the six injured people taken to hospital for treatment, as well as residents and staff at the hotel.

“I also want to thank all of those police officers whose quick and decisive actions contained the incident – one of whom was among those taken to hospital – as well as the work of the other emergency services.”

She added: “The Justice Secretary and I have been kept informed through the afternoon and briefed by the chief constable.

“While such a serious incident is rare in Scotland, it is another reminder of the courage and professionalism of our police officers who are willing to run towards danger in order to protect the lives of others.

“Clearly there is already much speculation around this incident, which remains under investigation.

“I would urge everyone to avoid such speculation, to not share potentially harmful or upsetting material on social media and to follow police advice while investigations are under way.”

Prime Minister Boris Johnson tweeted: “Deeply saddened by the terrible incident in Glasgow, my thoughts are with all the victims and their families. Thank you to our brave emergency services who are responding.”

One witness, who gave his name as John, told the PA news agency he saw two people stabbed in the hotel.

He said he came down from the third floor of the hotel to see the reception covered in blood.

“And then when I went down to the entrance I shouted at him and told him to stay calm and I will call for help.

“When I went to the entrance I saw another receptionist was fighting for his life and had been stabbed.

“There were two police officers there assisting him.”

Witness Craig Milroy, who saw the aftermath of the incident from an office building nearby, said he had seen four people taken away in ambulances.

He told the PA news agency: “I saw a man lying on the ground, of African descent, with no shoes on.

“He was on the ground with someone holding his side – I don’t know if it was a bullet wound, a stab wound, or what it was.”

Mr Milroy said the man was one of the four taken away by medics and believed him to be a victim of an attack.

He added: “After that we saw commotion, ambulances further up and we saw armed police all running into the hotel next to the Society Room.”

A Home Office spokesman said: “We are aware of an incident at West George Street in Glasgow, which is currently being investigated by the police.”

Tom Flanagan Karttunen, of the Radisson Hotel Group, said: “We are deeply saddened by the tragic event that happened today on West George Street in Glasgow.

“During the ongoing Covid-19 pandemic, the hotel has been occupied for temporary housing.”

He added: “We are working with the hotel owner and all the relevant local authorities, including Police Scotland, to support the investigation.”

A Mears Group spokesman said: “We will not anticipate a live police investigation, but we can confirm that the attack happened in a hotel where we are housing asylum seekers during the lockdown period.

“We will provide more details as we are able to and our priority is to look after the welfare of our service users who will no doubt be traumatised by this terrible event.

“Tonight, we also think of the staff in the hotel and our colleagues at the scene – all are in our thoughts.”