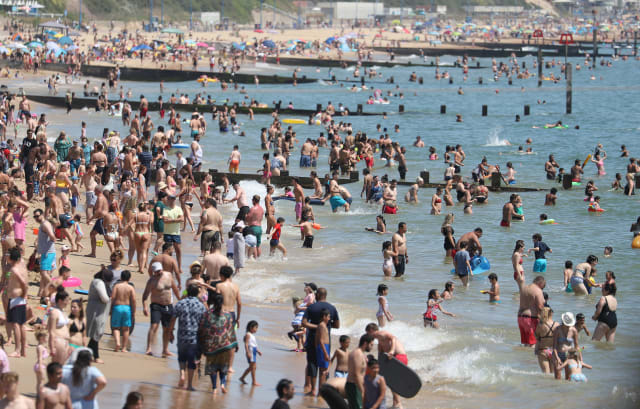 An unprecedented “breakdown in public behaviour” led to a major incident being called on Bournemouth beach, according to the leader of the local council.

Vikki Slade, Liberal Democrat leader of Bournemouth, Christchurch and Poole Council, said that many of the hundreds of thousands of people who descended on the Dorset beaches had caused multiple incidents of anti-social behaviour, were abusive and left large amounts of litter.

She said: “We had so many people here and the behaviour was so bad, the road blockages were such a problem that had someone been seriously ill there is a very good chance emergency vehicles wouldn’t have been able to get to them properly.”

Ms Slade said that the beaches had previously seen such high numbers, which were in the hundreds of thousands, but the problem stemmed from the lack of infrastructure which would normally be available.

“The behaviour of people, fly-parking on the middle of roundabouts and pavements – unprecedented – people defecating in a cardboard box on the beach and leaving it for our staff to deal with, refuse collectors being abused for doing their job, that is what made it unprecedented and that is why we had to take action.

“The people who behaved badly, and there were lots of them, ruined it for everybody else, are trashing our environment, and our local residents are fed up with it.”

Ms Slade said that the main threat of a Covid-19 spike would be people taking it back to their own communities, and added: “There is a Covid-19 issue but it’s very much about this breakdown in public behaviour that we are seeing.

“I asked somebody whether they were going to park on a junction and I got the finger.

“You are trying to be a good citizen and there were some really unpleasant people out there, and it’s not acceptable for our staff to be having to deal with that.

“We have recruited security guards to protect our beaches – that’s not a good sign is it?”

She added: “There was an ugly mood. Nobody is going on a foreign holiday at the moment, people can’t go to the pub, football match, theme park, can’t see their friends where they normally see them.

“That frustration and anti-authority thing was played out here with large, large groups of people who we don’t normally see, with a bad attitude, treating this place with disrespect.

“We have to hope that as other things open, the pain is shared with other people. At the moment it’s concentrated in small areas and that’s part of the problem, there is conflict between local communities and visitors.

“We would like to have lots of visitors that respect where we live.”

Ms Slade said that any action to shut beaches to prevent future incidents would need to be taken by the Government.

She added: “We don’t have the resources to deal with Glastonbury-sized visitors who are behaving like it’s a festival in a public space when they are not paying for the privilege.”

Residents have described the “mayhem” caused by the influx of visitors on the hottest day of the year so far.

Pat Munday, 73, described how cars were double-parking and blocking driveways, preventing emergency vehicles from getting through, while people were using the gardens of her apartment block as a toilet on Wednesday and Thursday.

She said: “It was just mayhem, people just want to have a good time but they just don’t give a monkeys about others.

“It’s a shame, it’s such a beautiful part of the country but people just need some control, people have lost all sense of respect – when they urinate in your garden, it’s the pits.”

Vic Williams, 75, said: “There was no idea of social distancing, when we left at 2pm the crowds were still arriving, there wasn’t any two metres.

“Because the restaurants are closed, there’s nowhere else for people to go.”

Mr Williams said the council’s tractors had been out in the early hours clearing up the tonnes of rubbish left.

He added: “The litter afterwards was unbelievable, they just walk away from the beach and leave their rubbish, there were tents left, BBQs, it costs us ratepayers a fortune.”