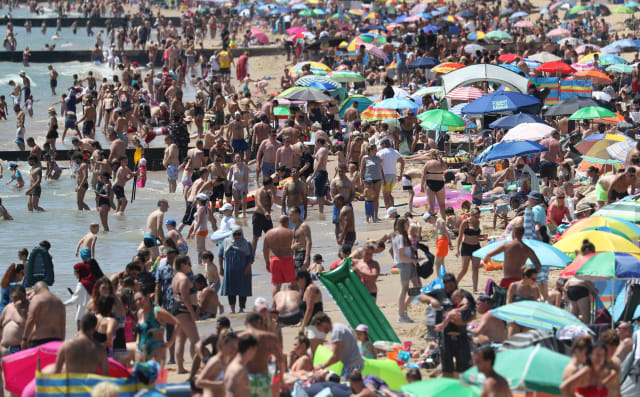 The UK has basked in the hottest day of the year so far but beachgoers are being warned to stay away from part of the south coast after thousands flocking there caused a major incident to be declared.

Scotland also had its highest temperature so far this year with the thermometer reaching 30C (86F) in Prestwick.

Bournemouth, Christchurch and Poole council said it was left with no choice but to declare a major incident after services were “completely overstretched” as huge numbers of visitors defied advice to stay away during the hot weather in recent days.

Bournemouth East MP Tobias Ellwood echoed calls from Dorset Police and the council for people to stay away and said he had asked the police minister to send additional officers if the force requested it.

Council leader Vikki Slade said: “The irresponsible behaviour and actions of so many people is just shocking and our services are stretched to the absolute hilt trying to keep everyone safe. We have had no choice now but to declare a major incident and initiate an emergency response.”

The heatwave is set to break with the arrival of thunderstorms bringing lightning strikes and downpours.

Storms had already developed through the course of the day across the north-west of Scotland and are expected to reach much of the west of the UK later on Thursday.

A yellow weather warning is in place for Northern Ireland, Wales and the west of Scotland and England, with the storms set to move eastwards into Friday.

The rainfall brings a risk of flooding and disruption to some places, the Met Office said.

There have also been warnings not to be tempted to cool off in open water, following the deaths of two people in recent days in Berkshire and Scotland.

A 10-year-old boy died after getting into difficulty in Loch Lubnaig, near Callander in the Highlands on Wednesday evening, Police Scotland said.

Meanwhile, a body was found following a search for a missing man at Lulle Brook in Cookham, Berkshire.

A cousin told the PA news agency that Syrian refugee Eyad Al Ryabi had gone into the water on Tuesday evening to try to help his friend.

The friend survived and was taken to hospital in a serious condition, Thames Valley Police said.

The National Fire Chiefs Council (NFCC) tweeted: “Although the weather is hot, the water is not. Cold water shock can take your breath away please do not be tempted to cool off in open water and #BeWaterAware.”

An amber level three heat-health alert, issued by the Met Office, was extended on Thursday to take in Yorkshire and the east and south of England as well as the West and East Midlands.

Health authorities have encouraged those most vulnerable – many of whom have been shielding during lockdown – to protect themselves amid the “exceptionally hot weather forecast this week”.

Public Health England (PHE) said older people, those with underlying health conditions, and very young children were all more at risk from the higher temperatures.

The storms are expected to continue from midday on Friday through to Saturday morning, with another yellow warning in place for the whole of the UK.

Areas hit by the storms could experience “torrential downpours” with between 30mm to 50mm of rain falling in an hour.

The Met Office said UV levels were expected to remain at eight across many parts of the UK on Thursday.

Dr Michaela Hegglin, associate professor in atmospheric chemistry at the University of Reading’s Department of Meteorology, said Thursday could see some of the “highest UV levels ever recorded” in Britain.

Dog owners have been urged to avoid exercising their pets during the hottest part of the day, with Vets Now, a provider of emergency veterinary care, warning that the average survival rate of a dog diagnosed with heatstroke was 50%.

Meanwhile, the NFCC said it wanted to “debunk this myth” that hand sanitiser left in hot cars could pose a fire risk.

Roy Wilsher, NFCC chair said: “We want to reassure people that this product will not combust if left in a car – even on the hottest day. For hand sanitiser to cause a fire it would need to come into contact with a spark.”