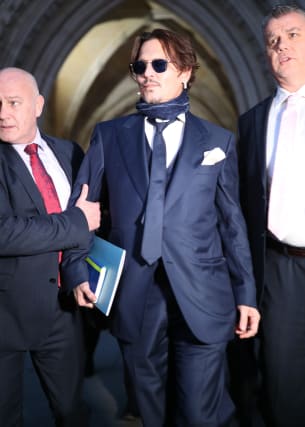 The Sun has asked the High Court to throw out Johnny Depp's libel claim against the newspaper over the Hollywood star's alleged failure to disclose text messages of him apparently trying to buy drugs in Australia.

The 57-year-old actor is suing the tabloid's publisher, News Group Newspapers (NGN), and its executive editor, Dan Wootton, over an April 2018 article which referred to Mr Depp as a "wife-beater".

The article related to allegations made against Mr Depp by actress Amber Heard, 34, that he was violent towards her during their marriage – which he strenuously denies.

A three-week trial at the Royal Courts of Justice in London – which was due to start in March, but was delayed because of the Covid-19 pandemic – is set to begin on July 7, with Mr Depp's former partners Vanessa Paradis and Winona Ryder among the witnesses expected to give evidence.

But, at the latest preliminary hearing on Thursday, NGN's lawyers said Mr Depp's claim should be struck out, claiming he deliberately withheld text messages they say show him trying to obtain "MDMA and other narcotics" while in Australia in 2015.

NGN's barrister, Adam Wolanski QC, told the court that his client had recently obtained a series of text messages between Mr Depp and his assistant Nathan Holmes from Ms Heard's American lawyers.

Mr Wolanski said: "The Australia drugs texts, on the face of it, demonstrate that the claimant was at the very least seeking to obtain such drugs from Mr Holmes in late February and early March 2015, and in all probability had obtained and taken them."

He argued that "the failure to disclose them in this case is a clear breach" of a previous court order requiring Mr Depp to provide all documents from separate libel proceedings against Ms Heard in the US.

Mr Wolanski said: "There is a real risk that the claimant has failed to provide proper disclosure to the defendants, and that the defendants cannot have a fair trial."

However, the actor's barrister, David Sherborne, said: "The issue in this case is whether the defendants can prove that the claimant committed serious domestic violence and put Ms Heard in fear. It is not about whether Mr Depp asks for drugs."

In his witness statement for the trial, Mr Depp said: "I have been open about my challenges with alcoholism and addiction throughout my life.

"In fact, I started drinking and taking drugs when I was still a child. I am not in any way embarrassed to say this."

Mr Depp, who appears to be observing the virtual hearing, said his "addiction over the years has been to Roxicodone pills, which are often referred to as 'Roxies' and which is one of the brand names for oxycodone which is is an opoid prescription painkiller".

He added: "I have taken other drugs in my life and I did take other drugs during the course of our relationship but I never suffered with addiction from those drugs. Nor did any drug or alcohol ever make me undertake violence against anyone."

Mr Depp also said he and Ms Heard "took drugs together", including MDMA, magic mushrooms and cocaine, but that "these were not common occurrences".

Mr Sherborne said NGN "have lost focus on what this claim is about and what the claimant has admitted – frankly – in his evidence".

The barrister told the court: "The full trial of these appalling allegations, published in The Sun newspaper to millions of people, is of enormous importance to Mr Depp."

He added: "It is time for the defendants to defend the allegations they published to millions of readers of their newspaper, and which they have persisted in very publicly throughout two years of litigation."

Following a previous hearing in May, the High Court allowed the statements of Ms Paradis and Ms Ryder, who both say Mr Depp was "never" violent to them, to be included.

In 2014, Ms Heard and Mr Depp recorded a now infamous video apologising for taking their Yorkshire terriers, Pistol and Boo, into Australia illegally.

Ms Heard pleaded guilty to falsifying an immigration document to conceal the dogs in a private jet in 2014 and avoided jail under a deal which included appearing in the video warning others against breaking Australia's strict quarantine laws.

Mr Sherborne previously told the court that Ms James, who worked for Ms Heard during the early years of her relationship with Mr Depp, claims Ms Heard asked her to lie about "the Australia dogs episode".

Lawyers for NGN and Mr Wootton have described Ms James as a "disaffected ex-employee" who was giving "contentious and malicious evidence".

The court has heard that Mr Depp intends to travel from his home in France to London to give evidence, while Ms Heard is believed to have already travelled to the UK from California.

The libel claim against NGN and Mr Wootton arises out of publication of an article in The Sun in April 2018, under the headline: "Gone Potty – How can JK Rowling be 'genuinely happy' casting wife-beater Johnny Depp in the new Fantastic Beasts film?"

Mr Depp has brought separate libel proceedings against Ms Heard in the US, which the court has previously heard are "ongoing".