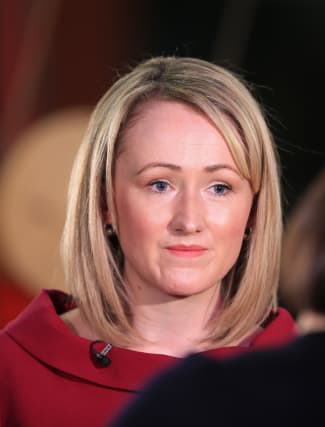 Just a few months ago Rebecca Long-Bailey was vying to make the transition from former pawn shop assistant to would-be prime minister in the Labour leadership race.

But she has now been caste onto the backbenches in a very public bust-up with Sir Keir Starmer.

Sir Keir, the centrist Labour leader who garnered twice the vote of Ms Long-Bailey in the battle to succeed Jeremy Corbyn, wasted little time in expelling his ex-rival from her post as shadow education secretary in yet another internal party face-off revolving around accusations of anti-Semitism.

The left wing northern MP insisted she had not endorsed all aspects of the article, but despite allies rallying around her, Sir Keir moved to dispatch her from Labour’s top team.

It was a sudden and unexpected fall for Ms Long-Bailey who had been seen as the great hope of Corbynistas as swathes of seats in Labour’s “red wall” across Wales and northern England collapsed on general election night last December.

Talk of the then shadow business secretary taking over as the “continuity Corbyn” candidate to replace the two-time election loser rose as Labour’s seat tally fell.

The Salford and Eccles MP, 40, was projected as the clear left-wing standard bearer in a contest in which Sir Keir took a decisive early edge.

When reciting her biography, Ms Long-Bailey tends to dwell on the jobs she had before becoming a successful lawyer, such as working in a pawn shop.

She has also been keen to point out her working-class credentials by saying she took jobs in call centres, a furniture factory and as a postwoman.

A close ally of Jeremy Corbyn who toed the leader’s line, some detractors within the party dubbed her “wrong-daily”.

But Sir Keir has now created a potential focal point for any opposition to him on the backbenches, and the fact Ms Long-Bailey is close friends with the party’s deputy leader Angela Rayner also sets up an intriguing situation for the future.

An MP since only 2015, Ms Long-Bailey played a prominent role in the last general election campaign, which saw the party receive its biggest hammering since 1935.

But leadership campaign supporters insisted she was a good communicator whose northern roots would have made the party seem less London-focused and helped take back the previously lifelong Labour seats it lost to Prime Minister Boris Johnson’s Conservatives.

After taking a post-election profile so low it was subterranean, Ms Long-Bailey broke cover with a piece in The Guardian at the end of December where she – gently – tried to put some distance between her campaign and Mr Corbyn by branding herself a “progressive patriot” and stating that the party’s “compromise solution” on Brexit had not gone down well with voters.

A mother-of-one, Ms Long-Bailey wrote of her working-class upbringing in Greater Manchester, where she saw her union official father deal with “rounds and rounds of redundancies”.

“When I began my first job in a pawnbrokers, I saw people forced to give up family heirlooms so they could afford to feed their children.”

Announcing her bid to head the party, Ms Long-Bailey struck a solidly socialist tone, writing in Tribune: “We need a leader that can be trusted with our socialist agenda. A leader who is totally committed to the policies and has the political backbone to defend them.

“We need a proud socialist to lead the Labour Party, driven by their principles and an unwavering determination to see democratic socialism in our lifetime.”

But, the ex-phone bank worker did not get the call she wanted to be Labour leader – and has now been cut off from the front bench by Sir Keir.