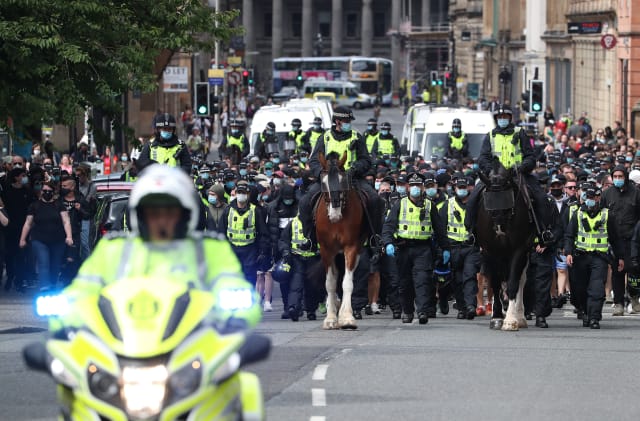 Councillors and an MSP have written to Police Scotland questioning the response of officers to recent protests in Glasgow city centre.

The Glasgow City Council representative’s letter was sent days after an event aimed at “sending a positive anti-racist message from Glasgow’s George Square to the world on World Refugee Day”.

Mr Kelly said peaceful protesters and members of the public were attacked on two separate occasions in the square.

He wrote: “These appeared to be planned attacks and a quick search of known social media accounts shows that groups such as the National Defence League had called people out onto the streets.

“Was there not sufficient advanced warning to keep these individuals separate from the public?”

Police vans lined the square on Saturday, with more than 100 officers in attendance, including riot officers and the mounted unit.

Ahead of Saturday’s protests, the Scottish Police Federation (SPF) issued a statement suggesting nationalists, unionists, “statue wreckers and statue protectors” are as guilty as each other when it comes to protests during the coronavirus lockdown.

Mr Kelly said: “While I understand that Police Scotland have no responsibility for this organisation there has also been an attempt to insert the narrative of football rivalry into a number of protest movements in order to condemn both sides.

“I find this deeply troubling and do not believe that it is a fair representation of the facts.”

Members of the Green Brigade, linked to Celtic ultras, arrived supporting the anti-racism rally which was attended by more than 500 people on Saturday.

Officers kettled the group towards the Gallowgate in the city’s east end, where a 42-year-old man was then arrested.

Raising concerns about the officers’ response, Mr Kelly added: “They kettled a group of demonstrators in the middle of the square, pushing them together making social distancing impossible.

“This was in sharp contrast to the response to actual violence on two occasions in the past week.

“What evidence was there to suggest that a peaceful demonstration that lasted for nearly two hours would suddenly erupt into violence?”

In their letter to Ms Hendren, they said: “There is a strong impression that a lower-key approach has been taken to the protests by far right and loyalist groups than was taken in relation to Saturday’s anti-racism demonstration.”

In a statement to PA, Ms Hendren said: “I have received Mr Kelly’s letter and responded directly to him.

“It’s important to reiterate that significant police resources were deployed at George Square to prevent the disgraceful scenes of violence and disorder witnessed in previous days.

“Those who turned up to protest were facilitated with an appropriate policing response.”

Meanwhile Mr Kelly also used his letter to question why some officers had “attached patches to their uniform of the ‘Thin Blue Line’ insignia”.

He asked: “Is this an approved item of uniform under section 11.4.5 of the Uniform and Appearance Standard (Police Officers) Standard Operating Procedure?”

His remarks have been criticised by Christine Fulton, of the UK charity Care Of Police Survivors (COPS), which supports families of officers who have lost their lives on duty.

She founded the charity after the death of her husband Louis in 1994 in Glasgow’s Gorbals area.

Ms Fulton told the PA news agency: “This does raise its head occasionally, that they don’t think officers in Scotland should be wearing a union (flag) patch – perhaps they would be happier with a saltire one – but it’s a national charity.

“We support officers from England, Ireland, Scotland, Wales so it’s right that the patches is the Union Flag.

“It doesn’t make any difference to us which force they serve and, we’re all the same. We’re all one big family.

“What upset me most is that as a Glasgow councillor he didn’t appear to know, or he should have known, of Lewis and how he died and what this charity represents – this is Lewis’s legacy.

“It’s very disappointing because he’s trying to make it into a political thing, something quite sinister, when it really isn’t.

“To try and use it for political game is dreadful. As a charity we have such support from Humza Yousaf – I really can’t praise that man enough for the backing that he gives us.”