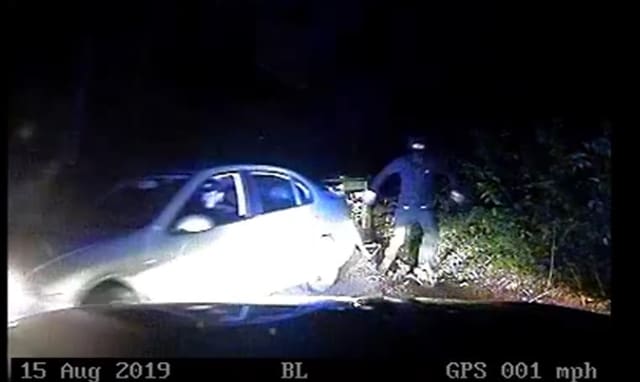 A tragic series of events that led to the “gruesome discovery” of Pc Andrew Harper lying catastrophically injured in a country lane has been played out in court.

At 11.17pm on August 15 last year, homeowner Peter Wallis called 999 to report thieves making off with his quad bike in Stanford Dingley, Berkshire.

The Old Bailey heard how Mr Wallis had confronted the thieves earlier that day and was at home when they returned under the cover of darkness wearing masks and gloves.

Mr Wallis told the Thames Valley Police operator: “I’ve got four masked men outside my house and they’ve got weapons.

“They came round earlier and now they’re at my property in Stanford Dingley.”

In the call played in court, Mr Wallis said they had “hand-held things” and were “all masked”, as he asked the operator to send someone to his house.

Asked if he was home alone, Mr Wallis said: “Yeah. Oh, they are stealing my quad bike, I’m going out there now.”

The operator told him not to go out, but Mr Wallis said: “I don’t care, I’ve got to protect that bike.”

The operator said officers were on their way, adding: “You can’t go out there if they’ve got a weapon, you are going to be hurt.”

He responds: “There’s all sorts of pieces of wood out there, they can pick up anything. But they’re not taking my damn bike.”

Pc Harper and his crew mate Pc Andrew Shaw responded to Mr Wallis’s report, even though their shift had ended.

As Pc Harper tried to apprehend one the suspects, his ankles got caught on a tow rope attached to their Seat Toledo and he was dragged to his death.

Jurors were shown harrowing video footage of the incident recorded on a camera attached to the officers’ unmarked BMW patrol car.

Giving evidence, Pc Shaw described the moment his colleague appeared to fall over and disappear from view.

The best way he could describe it was like a waterskier, he said: “Feet whipped forward and you land on your back – that’s how Harps fell.”

Pc Shaw told jurors: “I thought maybe he slipped on something.

“I just knew he was in trouble.”

Pc Shaw told jurors he set off in the car to find his colleague and came across his stab vest further down the lane.

He then learned that another officer had reported a “body in the road” near the A4.

Prosecutor Jonathan Laidlaw QC said: “What then follows, you leave the car and had the gruesome discovery that body is your colleague.

“You obviously did your best to attend to Pc Harper. It’s clear he has a catastrophic series of injuries and there’s nothing that can be done for him.”

Eyewitness Jack Whittenham, who had been driving on the A4, described seeing Pc Harper’s body being dragged on the road and hitting the curb, before he became detached from the Seat.

In a statement read in court, he said: “For a very brief second I thought the body had been a deer… I quickly realised it was a person. It looked like a rag doll.”

The Seat driver Henry Long, 19, and his passengers Jessie Cole and Albert Bowers, both 18, from near Reading, have admitted conspiring to steal the £10,000 quad bike but have denied Pc Harper’s murder.

Long has admitted manslaughter but denies intending to harm the 28-year-old officer.