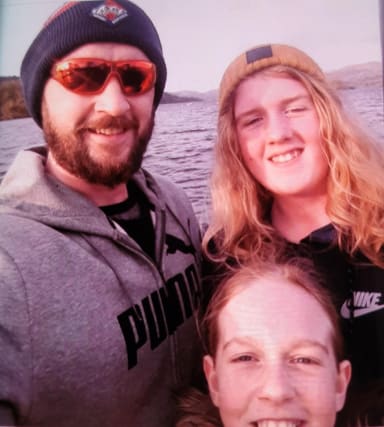 A man has been charged with three counts of causing death by dangerous driving after a crash in which a father and his two children died.

Cumbria Police said David Logan, 47, of Broughton Road in Dalton, was remanded to appear at South Cumbria Magistrates' Court on Friday after he was charged in connection with the collision, in which Joshua Flynn, 37, his son Coby-Jay, 15, and daughter Skylar, 12, died.

The family and their beloved dog Troy were out for a Father's Day walk when they were hit by the Peugeot 206 on Abbey Road in Dalton-in-Furness, Cumbria, at about 2.30pm on Sunday.

In a statement, their family paid tribute to the "doting dad" and his children.

They said: "From the minute we received this terrible news our whole world has been turned upside down and no words can describe how devastated we are feeling.

"We are utterly heartbroken and upset by the loss of Joshua, Coby-Jay and Skylar.

"We would like to thank everyone for their kind messages of support, the cards and donations received.

"Joshua was a family man and a good guy. He would do absolutely anything for anyone and was a genuine, lovely man.

"He was a loving husband and doting dad.

"Joshua was fitness mad and loved going to the gym and exercising.

"Coby-Jay was a typical teenager, obsessed with computers and computer games, in particular his Nintendo.

"He was a lovely young man, kind, happy and upbeat.

"Skylar like any young girl at the moment was Tik Tok mad. Like her brother, she enjoyed playing on computer games – in particular Roblox – exchanging pets.

"She was always so happy with a lovely smile on her face."

The family also paid tribute to Yorkshire terrier Troy, who was described as "another member of the family" and "such a good and well behaved lad".

Police are continuing to urge anyone who witnessed the incident or the vehicle in the area to contact them on SCIU@cumbria.police.uk, or to call 101 referencing incident 124 of June 21.