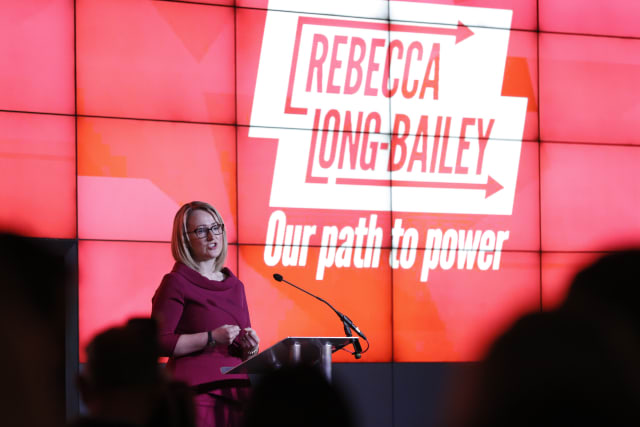 Tensions over how to tackle allegations of anti-Semitism within the Labour party continued to rage after Sir Keir Starmer fired leading left-winger Rebecca Long-Bailey from the front bench.

Ms Long-Bailey, who was branded the “continuity Corbyn” candidate in the recent leadership battle, was sacked after she shared an article on social media which Sir Keir claimed expressed an anti-Semitic conspiracy theory.

In the article, actor Maxine Peake said police linked to the death of George Floyd in the US had learned their tactics from the Israeli secret services.

The claim has been denied by Israel, and Ms Peake later said it was wrong.

Ms Long-Bailey, who said she did not endorse all aspects of the article, acknowledged that the claim had caused  “extreme concern” but said politicians should speak out on issues such as claims of police brutality.

She told the Daily Mirror: “There is a valid concern about police practices across the world and I don’t think that, worded in the right way, it’s racist or anti-Semitic to draw attention to that.”

As leading left-wing figures in the party spoke out about the sacking of Ms Long-Bailey, the Salford and Eccles MP said Sir Keir needed to live up to his leadership campaign promises of bringing Labour together.

Ms Long-Bailey said: “I completely agree with the need for us to intensively rebuild our relationship with the Jewish community and the wider electorate. I can understand the difficulties of Keir’s position.

“Whilst we don’t agree on everything, we agree on the need for a Labour government and I’ll still do everything I possibly can to make sure that happens.

“The only way that we’ll win a general election is by being unified as a party that’s why it’s so important for me to make the choice not to be critical about the way I might have been treated.”

But, Ms Long-Bailey said she was “incredibly upset” by Sir Keir’s decision to remove her from her shadow cabinet role, while Jewish groups praised Sir Keir for his swift action.

Sir Keir said his “primary objective” was to rebuild trust with the Jewish community after years in which Labour has been embroiled in allegations of anti-Semitism under Jeremy Corbyn.

“I do not consider sharing that article furthered the cause of rebuilding trust with the Jewish community and that’s why I stood Rebecca Long-Bailey down,” he said.

Ms Long-Bailey originally tweeted a link to the interview with Ms Peake on Thursday morning, describing her as “an absolute diamond”.

She later tweeted a “clarification” in which she said she had shared the article because of the actress’s “significant achievements” and her support for Labour.

She added: “It wasn’t intended to be an endorsement of all aspects of the article.”

However, there was an angry response from key allies of the former leader on the Labour left.

Former shadow chancellor John McDonnell tweeted: “Throughout discussion of anti-Semitism it’s always been said criticism of (the) practices of (the) Israeli state is not anti-Semitic.

“I don’t believe therefore that this article is or (that) Rebecca Long-Bailey should’ve been sacked. I stand in solidarity with her.”

Unite union general secretary Len McCluskey tweeted the sacking of Ms Long-Bailey was “an unnecessary over-reaction to a confected row. Unity is too important to be risked like this.”