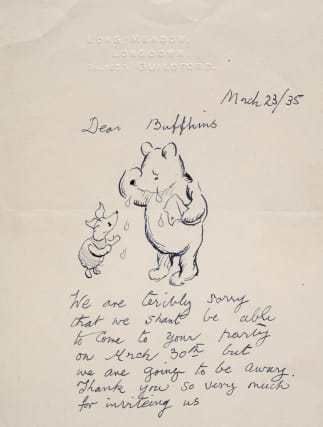 A letter “written” by Winnie the Pooh has sold for more than double its estimated price at auction.

The note was penned on embossed letterhead paper 85 years ago by Pooh illustrator E H Shepard in reply to a birthday party invitation from an 11-year-old boy to the fictional bear.

It is littered with misspellings, to make it authentic, and a drawing of a crying Pooh with his friend Piglet, and was sent to the son of birth control pioneer Marie Stopes, who was a close friend of the illustrator.

The note is addressed to “Buffkins”, as Dr Stopes’s son, Dr Harry Stopes-Roe, was known as a child.

It reads: “We are teribly sorry that we shant be able to come to your party on March 30th but we are going to be away. Thank you so very much for inviteing us.”

The letter was being sold by the Stopes-Roe family and went under the hammer at Dominic Winter Auctioneers in Cirencester, Gloucestershire.

Auctioneer Chris Albury said there was a lot of interest from online bidders and over the telephone.

“The winning bidder was a private UK collector. I’m absolutely delighted that this was appreciated so much and is going to a good new home,” he added.

Stopes-Roe was a well-known humanist and was married to the daughter of illustrious scientist, engineer and inventor Sir Barnes Neville Wallis. He died in 2014.

Shepard, who died in 1976, was an illustrator for Punch magazine for 50 years, though he remains best known for his Pooh illustrations.