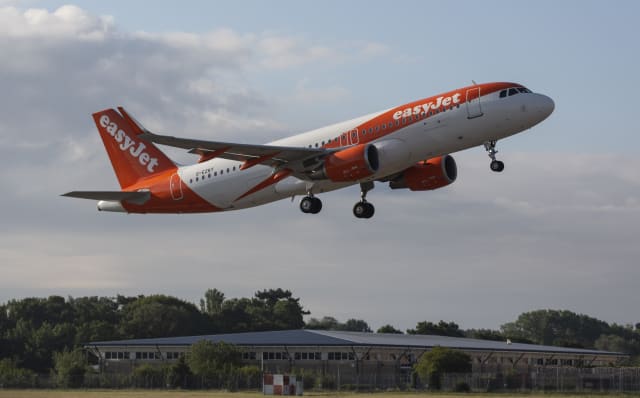 EasyJet is to launch hundreds more international flights at airports across the UK from next week.

The airline said it will restart the international and domestic flights from July 1, as it also secured a major cash injection to bolster its finances in the face of the pandemic.

Holidaymakers will be able to fly from 14 airports across the UK to a number of countries including France, Spain and Italy.

From the start of next month, it will run around 500 flights each day across Europe, including over 900 flights a week to and from the UK.

On June 15, it restarted a “small number” of flights for the first time since its aircraft were grounded in March.

EasyJet said it plans to fly around half of its 1,022 routes in July, before increasing to around 75% in August.

The announcement follows reports that air bridges will be available from next week to allow Britons to take holidays in other countries without quarantining for 14 days.

The Government will finalise agreements in coming days to allow people to travel from the UK to a small number of countries including Spain, France and Greece, according to reporting by The Times, The Sun and The Daily Telegraph.

Robert Carey, chief commercial and strategy officer, said: “We are really pleased to be relaunching even more of our flights from 1 July and starting to get customers away on their much-needed summer holidays.

“Of course, the safety and wellbeing of our customers and crew remains our highest priority.

“This is why we have implemented a number of measures enhancing safety at each part of the journey from disinfecting the aircraft to requiring customers and crew to wear masks.”

It came as the budget airline raised £419 million from investors to help it withstand the continuing impact of coronavirus.

The airline saw shares slip on Thursday morning after it revealed it secured the funding through a placing of 59.5 million shares at 703p per share.

The company slid to a £353 million pre-tax loss for the year to March, falling from a £272 million loss for the same period a year earlier.

EasyJet said the share placing would shore up its finances after grounding all of its flights for 11 weeks as a result of the coronavirus outbreak.

Passenger numbers fell by 7.4%, around 3 million people, in the year to March, as travel restrictions in February and March weighed on trading.

Last month, the airline announced plans to shed around 4,500 jobs from its workforce as part of cost-cutting efforts.

It also secured around £1.7 billion of additional funding, including around £600 million from the Bank of England’s Covid Corporate Financing Facility (CCFF).