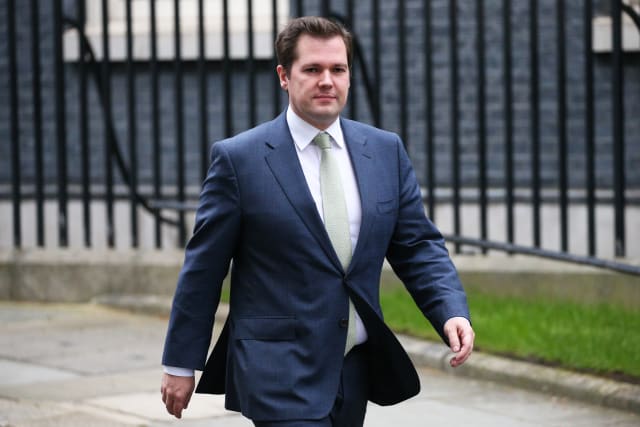 Boris Johnson is standing by Communities Secretary Robert Jenrick as a Government minister suggested anyone attending Tory fundraising events could get similar access to politicians as wealthy developer Richard Desmond did.

Downing Street said the Prime Minister still had “full confidence” in Mr Jenrick, but confirmed Mr Johnson had spoken to the embattled minister in recent days.

The Housing, Communities and Local Government Secretary is fighting to keep his job after documents revealed the extent of the contact between himself and Mr Desmond before the Cabinet minister signed off on the 1,500-home Westferry Printworks scheme in east London.

The pair exchanged text messages following a meeting at a Conservative Party event in November, and officials in Mr Jenrick’s department described him as being “insistent” that the project be given the green light before a new levy added millions to the cost.

Mr Jenrick later had to quash his own approval, conceding that the decision was “unlawful” due to “apparent bias”.

Labour claims the move to approve before Tower Hamlets Council’s community infrastructure levy (CIL) came into force would have saved Mr Desmond’s Northern and Shell company up to £50 million on the scheme, which was reported to be worth £1 billion.

Under pressure to explain why a wealthy businessman could have such access, Mr Zahawi indicated that anybody could deploy similar tactics.

“If people go to a fundraiser in their local area, in Doncaster (for example), for the Conservative Party, they will be sitting next to MPs and other people in their local authorities and can interact with different parts of the authority,” he said.

Mr Zahawi stressed that “the access did not buy this billionaire a decision”.

A Labour spokesman said: “Senior Tories say that anyone can get the same access to the Government Richard Desmond enjoys – all they have to do is attend swanky Tory fundraisers and hope they get sat next to an MP.

“The ‘cash for favours’ scandal has laid bare that it’s one rule for the Tories and their wealthy friends, another for the rest of us.”

Liberal Democrat housing spokesman Tim Farron said: “The ‘defence’ of Robert Jenrick is in reality little more than an admission of cash for access.

“It seems the Tory Party’s commitment to the ‘levelling up’ agenda amounts to sleaze and corruption.”

He added: “I have nothing against Mr Jenrick personally, but integrity in politics matters. He must resign today, and, if not, the PM must dismiss him or else lose all moral authority.”

But the Prime Minister’s official spokesman repeatedly stressed that Mr Johnson believed the case was closed.

“The PM has spoken with the Communities Secretary,” the spokesman said.

“The Communities Secretary gave his account in public and to Parliament and published the relevant documentation.

“In light of the account that was given, the PM considers the matter closed.”

“The documents he was forced to release are damning and it looks like he rushed through the decision to help save the developer money and short-change my residents.”

The stash of documents and texts, released after pressure from the opposition, showed that multi-millionaire Tory donor Mr Desmond urged Mr Jenrick to approve the east London development scheme so that “Marxists” did not get “doe (sic) for nothing”.

In an email disclosed in the batch of Government papers, a Housing Ministry official indicated that the Secretary of State (SoS) wanted Westferry to be signed off and approved the following day so that it would avoid the CIL.

It stated: “On timing, my understanding is that SoS is/was insistent that decision issued this week i.e. tomorrow – as next week the viability of the scheme is impacted by a change in the London CIL regime.”

Mr Desmond donated £12,000 to the Tories two weeks after Westferry was approved by Mr Jenrick.

The Cabinet minister originally gave the development the go-ahead in January 2020, overruling both Tower Hamlets Council and a planning inspector.

Sir Bernard Jenkin, chairman of the Commons Liaison Committee, said he thought Mr Jenrick would survive the calls for him to resign.

The senior Tory told Today: “Clearly there has been a little bit of a mistake and the decision has had to be rescinded but there is no sign of actual maladministration.”

But former head of the Civil Service Lord Kerslake said the affair had raised “troubling issues” about “access and influence”.