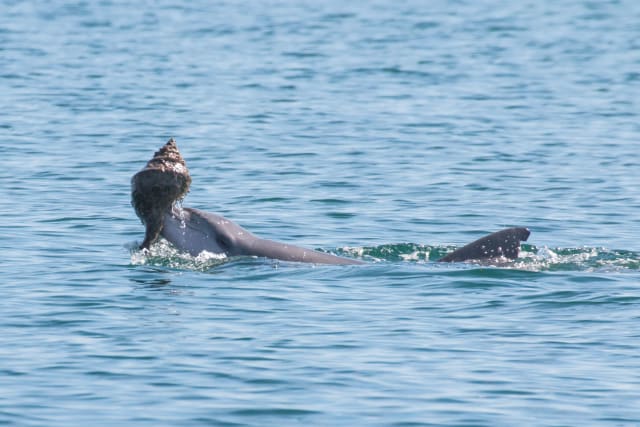 Dolphin mothers may know best when it comes to hunting, but babies are learning tricks from their peers too, new research has found.

An international team including scientists from the University of Leeds say their findings demonstrate for the first time that dolphins can learn foraging techniques outside the usual mother-calf bond.

The aquatic mammals in Shark Bay, Western Australia, are known to use a technique called shelling in the search for food, but only now does it appear some caught onto the act by learning from peers.

Shelling is a tactic used when prey hide in large empty shells of giant sea snails, which dolphins lift to the surface using their beaks and shake to empty the contents into their mouths.

While some calves will have acquired this skill from their mother, others have discovered it by observing other dolphins, according to the study published in Current Biology.

“These results were quite surprising, as dolphins tend to be conservative, with calves following a ‘do-as-mother-does’ strategy for learning foraging behaviours,” said Dr Sonja Wild, a post-doctoral researcher based at the Centre for the Advanced Study of Collective Behaviour at the University of Konstanz.

“However, our results show that dolphins are definitely capable, and in the case of shelling, also motivated to learn new foraging tactics outside the mother-calf bond.

“This opens the door to a new understanding of how dolphins may be able to behaviourally adapt to changing environments, as learning from one’s peers allows for a rapid spread of novel behaviour across populations.”

Researchers say their findings demonstrate the first quantitative evidence of horizontal transmission of a foraging tactic in toothed whales, providing further evidence of cultural similarities between dolphins and great apes.

“The fact that shelling is socially transmitted among dolphin peers rather than between mother and offspring sets an important milestone, and highlights similarities with certain primates, who also rely on both vertical and horizontal learning of foraging behaviour,” said Professor Michael Krutzen, director of the Department of Anthropology at the University of Zurich and senior author of the study.

“Despite their divergent evolutionary histories and the fact they occupy such different environments: both dolphins and great apes are long-lived, large-brained mammals with high capacities for innovation and the cultural transmission of behaviours.”

The team observed thousands of dolphins between 2007 and 2018, but only recorded a total of 42 shelling events performed by 19 individual dolphins, showing that the technique is rare.

However, scientists note that the behaviour occurs in bouts lasting a few seconds and is therefore hard to observe.