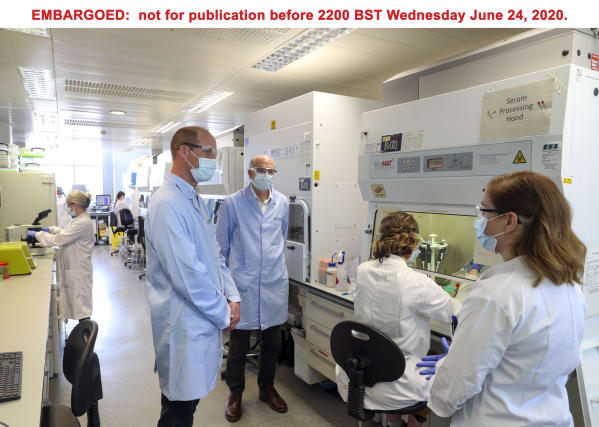 The Duke of Cambridge has described the work being done in the UK to find a Covid-19 vaccine as “incredibly exciting” and “fascinating”, before meeting “guinea pig” volunteers taking part in the University of Oxford trial.

William, who said his family is proud of the ongoing efforts by researchers in Britain in the fight against coronavirus, took a trip to the Oxford Vaccine Group’s facility at the Churchill Hospital in the city on Wednesday.

Wearing a mask, a protective coat and goggles for much of the visit, the future king toured the laboratory where samples from the clinical trial are being examined by researchers.

As well as meeting Professor Sarah Gilbert who is leading the trial and Professor Andrew Pollard, director of the vaccine group, he also spoke to members of the public who have volunteered to take part.

More than 4,000 participants are already enrolled in the UK, with enrolment of a further 10,000 people planned as researchers test the vaccine – known as ChAdOx1 nCoV-19.

Trials are also taking place in South Africa and Brazil and it is hoped an effective vaccine could be ready later this year.

Speaking to volunteers William enquired of one woman what had motivated her to take part, asking: “Were you just a willing guinea pig?”

The Oxford study was described as “probably” the “most advanced” in the world, this week by the Government’s chief scientific adviser Sir Patrick Vallance.

The Jenner Institute and the Oxford Vaccine Group began development on a vaccine in January and earlier this month pharmaceutical giant AstraZeneca signed a deal with the Coalition for Epidemic Preparedness Innovations (Cepi) to help manufacture 300 million globally accessible doses.

During the visit, while discussing the hopes for the vaccine to succeed, William said if it was announced the Oxford team had “cracked it” people would “breathe a huge sigh of relief”.

“People want there to be some sort of finality to it,” he said.

After William asked how the team might feel if things do not work out, Prof Gilbert said she was hopeful they would “see something”.

“The only question is how good it is and how long it will last,” she added.

The royal told the scientists he had recently spoken to an expert who said there were 1.5 million potential viruses “that could hop from animals into humans”.

He added: “Hopefully this will be a wake-up call to people.”

Highlighting the enormity of the challenge, Prof Pollard told William: “It’s success for the country and the world if these vaccines work, not for us.”

A day ahead of the visit William took part in a video call with some of those involved in the partnership, including AstraZeneca’s CEO Pascal Soriot and Oxford University’s vice chancellor Professor Louise Richardson.

The duke, who said he had “always been interested in medical science” told them: “It’s the most incredibly exciting and very welcome project that you’re all doing which is why it’s fascinating.”

Prof Richardson said William’s visit was “a real shot in the arm” for a team of researchers at the university who she said had been working “flat out, every weekend, every night”.

She said it had been important to those involved right from the beginning to ensure a vaccine could be accessed at reasonable prices by low and middle income countries, and for there not to be any profiteering.

Congratulating everyone involved, William said: “My family is very proud of everything that is going on here, particularly with the Oxford research side of things and the collaboration you are showing with AstraZeneca, I think it’s fantastic.

“If we can amplify and exemplify what is going on here to the rest of the world, then like you said Pascal, that’s going to be the quickest and best way to end everyone’s problems really, so please keep up the good work and just a huge well done.”