Two children among trio injured in explosion at house 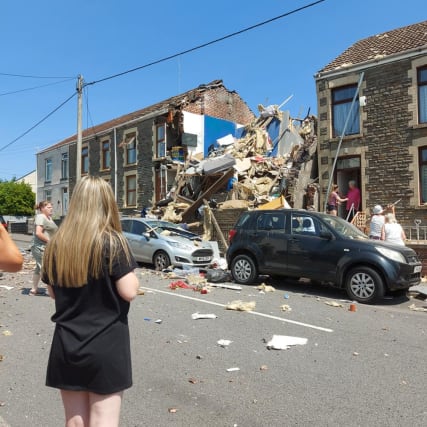 Three people have been injured in an explosion at a house in south Wales.

Emergency services were called to a property in Seven Sisters, near Neath, after reports of an explosion at 2.05pm on Wednesday.

The area surrounding Church Road has been evacuated.

A police spokeswoman said: “South Wales Police received numerous reports of an explosion at a property in Church Road, Seven Sisters, on Wednesday at 2.05pm.

“A number of properties and vehicles in the street have been damaged and the area has been evacuated.

“Three people, one adult and two children, have been injured in the incident.

“We remain at scene with emergency service colleagues and ask people to continue to avoid the area at this time.”

Kirsten Williams, 24, was in the garden of her mother and father-in-law down the road from the property when they heard the explosion.

She told the PA news agency: “The conservatory shook. A massive bang.

“My mother-in-law suggested a car crash or a lorry. I said no, that’s an explosion.

“My father-in-law rushed up the drive and saw people running across the road and called us up.

“I grabbed my 17-month-old son and off we went to see.

“What shook me the most was a small baby teddy bear was there laying on top of a car roof.”

A spokesman said: “We were called on Wednesday June 24 at approximately 2.05pm to reports of an explosion in a residential area of Seven Sisters near Neath.

“We responded with five vehicles of the hazardous area response team, one rapid response vehicle, two emergency ambulances and one specialised medical team, and we received the support of the Wales Air Ambulance.

“Our crews are currently at the scene.”