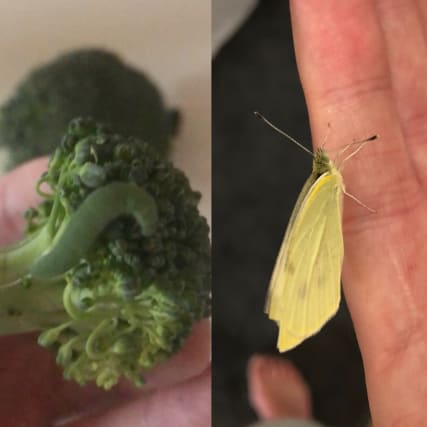 A radio presenter found himself raising seven “caterpillar children” after discovering the green stowaways in several heads of Tesco broccoli.

Sam Darlaston, 27, who lives in London, went to cook his “favourite vegetable” for dinner one evening when he discovered a small caterpillar hidden inside.

The Kiss FM presenter decided to keep it as a pet before asking his friend to buy him some fresh broccoli.

However, when his friend returned, they discovered a further five insects hidden in the latest vegetable.

A third attempt at buying broccoli revealed a seventh – and final – bug, which was transferred into a box in the living room, alongside the others.

Mr Darlaston said: “I didn’t think they would survive if I put them outside straight away.

“I read that caterpillars only eat their host plant and I didn’t have any broccoli in the garden. So I thought, the best bet is to keep them with some broccoli and they can leave when they’re older.”

After researching that it would be safe to release the Spanish white cabbage butterflies in the UK, Sam created a small ecosystem in his living room.

However, the paper-lid resulted in several of the bugs escaping into the house, with one cocooning around a scented vanilla stick and another underneath a candle holder.

Mr Darlaston said: “The first one, within three days he was a cocoon, but the last one took around eight days. But I almost fast-tracked them because I gave them unlimited food.

“Three of them got out and were in the lounge. You’re not meant to move them once they’re cocooned, so one is just in the lounge.

“My housemates have just embraced it and now come and check how they are.

“They were alright with it, they were just like, ‘that’s how lockdown is going then, we now keep caterpillars’.”

After tagging Tesco in the thread, they refunded him £1.10 for two of the heads of broccoli and said they would log the incident.

However, Mr Darlaston said: “It’s natural, isn’t it? It means they’re not using too many pesticides which is a good thing.”