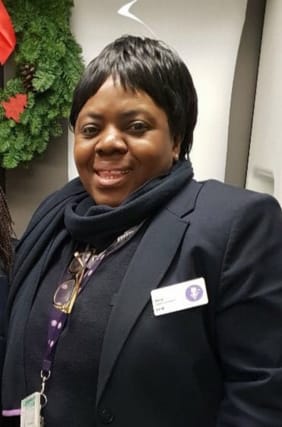 A memorial for transport workers could be erected at London Victoria station in honour of Belly Mujinga, who died after being allegedly spat at by a man who claimed to have Covid-19.

Transport Secretary Grant Shapps revealed he has been in discussions with trade unions over commemorating the dozens of staff who have died from coronavirus.

He told the Commons Transport Select Committee: “I’ve spoken to the unions and others about doing something in slightly longer-term to commemorate transport workers’ extraordinary input and effort to assist the country in this time of crisis, perhaps with some sort of commemoration or memorial.

“Perhaps even at Victoria station, where, sadly, Belly Mujinga worked but sadly died.”

He continued: “I think that might be an appropriate location to remember all transport workers during this crisis.”

Mr Shapps told MPs he is aware of the deaths of 54 transport workers who had been infected by Covid-19 and paid “huge respect to each and every one of them”.

He said they were doing “essential work” during the crisis, adding: “I would say of all transport workers, these are the people who have been getting the NHS workers, the care workers, essential workers, our food, and all the rest of it, to the right places at the right times throughout this crisis.

“Without which we literally – referring to all transport workers – wouldn’t have food on our tables and certainly wouldn’t have had the emergency services.

Manuel Cortes, general secretary of the Transport Salaried Staffs’ Association (TSSA), of which Mrs Mujinga was a member, said: “Our union fully welcomes this proposal from Grant Shapps and is willing to work with him to make sure it happens.

“It is a tragedy that we have lost transport workers during this health emergency.”

The death of Mrs Mujinga sparked outrage and questions about why she was not protected at the time of the incident, which was not reported to British Transport Police (BTP) until seven weeks later.

On March 21, she was on the concourse of London Victoria, where she worked, when a member of the public who said he had Covid-19 allegedly spat and coughed at her and a colleague.

She was admitted to hospital in Barnet, north London on April 2, and died with coronavirus three days later.

BTP interviewed a 57-year-old man but said the incident at the railway station did not lead to the worker’s death and decided not to refer the case to the Crown Prosecution Service (CPS).

It has since invited the CPS to conduct an independent review of the available evidence, and whether there were any further lines of inquiry.

A change.org petition, which is calling on Mrs Mujinga’s employer Govia Thameslink Railway to secure protection for its employees, has garnered nearly two million signatures.