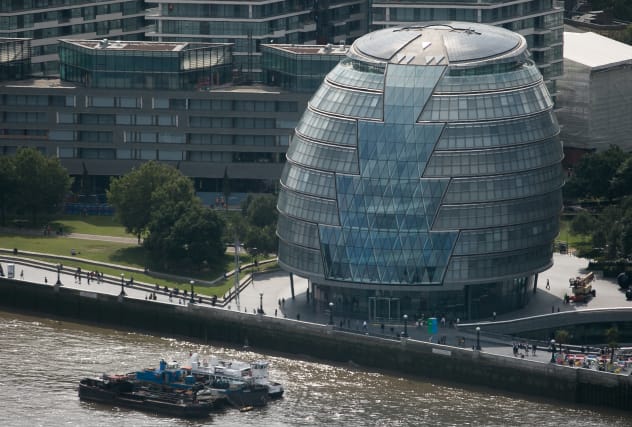 London’s government could move from City Hall as part of an effort to fill a £500 million black hole in the capital’s finances.

He has set out plans to move to The Crystal building in the Royal Docks in east London, which is already owned by the Greater London Authority (GLA).

The Norman Foster-designed City Hall was constructed at a cost of £43 million and opened in 2002.

Its unusual shape and construction led to it being dubbed the “glass testicle” by former mayor Ken Livingstone and the “glass gonad” by Boris Johnson.

The lease for the City Hall building was granted in 2001 for 25 years, but allows for a break in the contract after 20 years, in December 2021 – the first and only chance the GLA has to consider leaving.

The mayor believes the current rent is above market value, with the figure set to rise to £12.6 million after December 2021.

The GLA already owns The Crystal and it has an “outstanding” rating for environmental sustainability, meaning lower running costs.

Mr Khan said: “My first priority will always be to protect funding for frontline services, including public transport, the Met Police and the London Fire Brigade.

“That’s why I’m consulting on plans for the GLA to leave the current City Hall building next year and relocate to The Crystal at the Royal Docks in Newham.

“In normal times, it would be standard practice for any mayor to consider utilising the lease-break clause on the City Hall building that becomes possible this year, and to view it as an opportunity to ensure Londoners were getting the best value for money.

“In the current financial context, and with the looming black hole in London’s public finances, it would be negligent not to do so.

“Leaving our current home would save £55 million over five years, which would help us to protect and invest in the things that matter most to Londoners, as well as supporting the regeneration of the Royal Docks.

“The Crystal is a highly sustainable building on the site of London’s most ambitious regeneration project, where the GLA and Newham Council are working together to create a new commercial district and visitor destination with thousands of new homes and jobs.”

Notice to activate the break option has to be given this year and a decision is needed by September so there is time to plan and carry out the move.

Mr Khan has launched a formal six-week consultation on the proposal with the London Assembly, unions and officials.

The capital faces an estimated £493 million shortfall in its finances caused by the coronavirus crisis hammering business rates and council tax income.