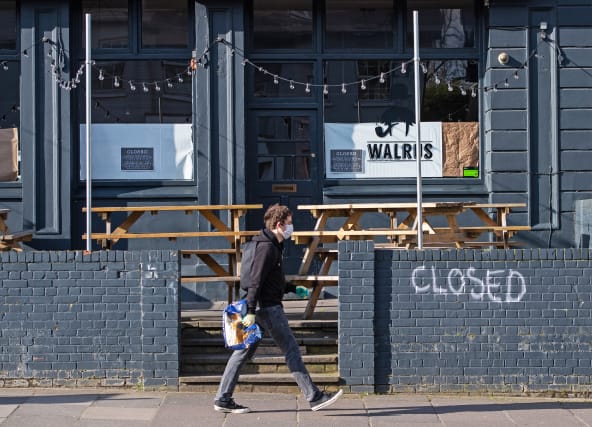 The coronavirus pandemic struck as households were still suffering a financial hangover from the last crisis, according to the Institute for Fiscal Studies (IFS).

We now face the “dual challenge” of overcoming the economic hit caused by coronavirus on top of problems which already existed, it argued.

The past decade has been a bad one for growth in living standards, with years of stalled productivity, poor earnings growth and deep cuts to working-age benefits acting as a drag, the IFS said.

Absolute poverty – which tracks the real incomes of low income households – had fallen by only two percentage points since 2007-08, it found.

Even after temporary increases to some benefits this year, out-of-work households are on average entitled to £1,600 per year less than they would have been without cuts since 2011, the IFS research, funded by the Joseph Rowntree Foundation, found.

This rises to £2,900 on average for out-of-work households with children.

Pascale Bourquin, research economist at the IFS and an author of the research, said: “The fate of household living standards over the coming years will hinge on how fast the economy can recover from the damage caused by Covid-19.

“The years following the Great Recession do not provide a good blueprint for a bounce-back: in the last decade, we have witnessed the slowest growth in household incomes since records began as earnings and productivity stalled and working-age benefits were cut sharply.

“We now have the dual challenge of trying to recover the ground people have lost in their careers and employment prospects, and addressing the problems we already had.”

The Covid-19 crisis also hit just after another stalling of income growth for those on middle incomes, the report said.

The IFS said: “We are now in danger of being reminded all too clearly that no pay growth can still be better than no jobs at all.”

Those in poverty tend to be less likely to be able to work from home than other workers, it added.

Helen Barnard, acting director of the Joseph Rowntree Foundation, said: “Coronavirus has delivered a major shock for the UK economy but it has also exposed problems which families in poverty have been grappling with for much longer.

“Finding a lasting solution has taken on a new urgency as the crisis has shown how close many of us are to being swept into poverty when circumstances change.”

She added: “The Government’s levelling-up agenda is now more important than ever and it can’t be left to drift. Redesigning our economy so that it works for everyone has the potential to deliver a stronger recovery and loosen poverty’s grip at the same time.”

Action for Children’s director of policy and campaigns, Imran Hussain, said: “Millions of families were struggling even before the coronavirus crisis hit and now they’re quickly reaching breaking point.

“Within just days of lockdown, we saw so many desperate parents we had to set up an emergency fund to help them stay afloat during the crisis with basic essentials like food and clothing. Action for Children’s key workers are battling to help frightened families come out the other side of this but, three months in, we know this is just the tip of the iceberg.

“Years of crippling cuts combined with a troubled roll-out of universal credit meant many families were already fighting to keep their heads above water.”

A Government spokesman said: “Throughout the pandemic our wide-ranging and generous support package has protected millions of jobs and livelihoods , with generous income support schemes, billions paid in loans and grants, tax deferrals and more than £6.5 billion injected into the welfare safety net.

“As we focus on fighting Covid-19 we remain absolutely committed to helping every part of the country return to growth, jobs and prosperity in a way that is safe. This means levelling up communities who have felt left behind and truly delivering for every region and nation of the UK.

“Already this year’s increase to the National Living Wage means a pay increase for two million of the UK’s lowest paid workers, with those working full time getting a £930 annual pay rise. And we’ve ended the benefits freeze, meaning millions will have seen a rise since April.”