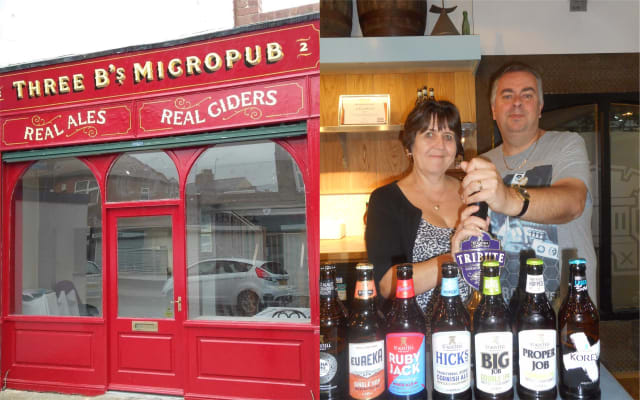 A husband and wife who were poised to fulfil their dream of opening a pub when lockdown was imposed are finally preparing to welcome their first customers for a pint on their premises.

Mark and Cheryl Bates moved from Birmingham to Bridlington in East Yorkshire to open up a new micropub, the Three B’s, which was readying itself to launch in the spring before coronavirus lockdown measures scuppered their plans.

The pub opened as a takeaway and delivery service on April 30 and will have been operating in that fashion for more than two months when, under new Government guidelines, customers will finally be allowed to sit inside for a pint for the first time.

“I’ve had so many people who have either become regular customers from takeouts or people who’ve come in to have a look around, and we’re looking forward to seeing them at 12 o’clock on the fourth of July.”

Mr Bates worked in the rail industry for 30 years, but has a passion for beer – he and his wife are members of the Campaign for Real Ale and he has organised a number of beer festivals.

They arrived in Bridlington at the beginning of March, having sold their home in Birmingham and invested their savings in the pub and a bed and breakfast, a plan which had been two years in the making.

“We’ve got a lot of debt at the moment which we need to clear as soon as we can,” Mr Bates said. “Financially, it’s been very difficult.

“We spent two years being quite prudent being between jobs and having difficulty selling our house, then we come here and have all this.

“But hopefully now we can try and reap the reward, and hopefully have lots of people in the pub drinking, subject to government restrictions.”

The pair have been unable to access any government help because the business was not up and running by the time lockdown was put into action.

But they are hopeful the pub – which sells only cask ale and cider, and has no TVs or music – will quickly start to turn a profit once customers are allowed in.

“We’re offering something different that Bridlington doesn’t offer at the moment,” Mr Bates said. “We believe our business plan is very robust with that unique selling point.”

The pub would hold up to 25 people in normal circumstances but, with social-distancing measures in place, is unlikely to accommodate more than 10.

“It’s going to be a pain in the posterior to manage social distancing, but from where we are at the moment it’s such a nice problem to have,” Mr Bates said. “It’s still going to be a pain, but you’re not going to have so much financial pain.

“I’ve seen a few not positive comments on social media, some people within the industry saying ‘it’s not possible, we can’t do this, we can’t do that’ whereas my glass is definitely, definitely half full, if not totally full, from where we were.”