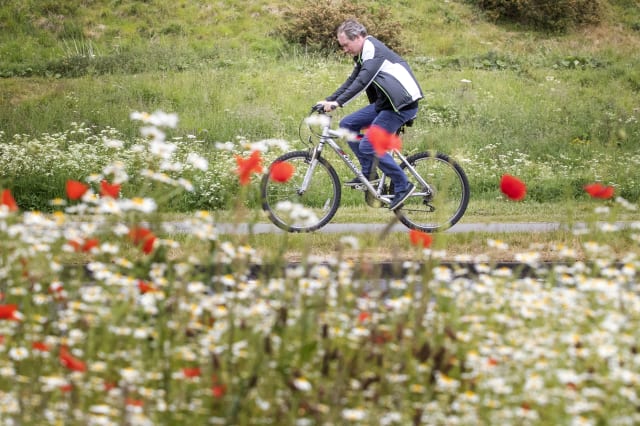 The Government must seize the “once-in-a-lifetime opportunity” to deliver a pandemic recovery that speeds up the fight against climate change, its advisers have urged.

In its annual report to Parliament, the Committee on Climate Change has warned the UK is not making the progress it needs to drive down emissions and prepare for the impacts of rising temperatures.

But recovering from the economic shock of coronavirus and at the same time accelerating moves to cut greenhouse gas emissions to net zero by 2050  is “absolutely necessary and entirely possible”, the advisers said.

The report calls for rapid “green stimulus” measures including upgrades to homes so they are more energy efficient, schemes to make it easier for people to cycle and walk, tree planting and restoring peatland.

These kind of green policies can create lots of jobs across the country in the short run, keep money and employment within the UK and have other benefits, such as for health and nature, as well as cutting emissions, it said.

And investment in clean technology such as heat pumps, which are a clean alternative to boilers, can help drive down costs in the longer run, the report said.

The committee also called for the target to phase out sale of new petrol and diesel cars and vans to be brought forward to 2032.

And to help protect the UK from climate impacts, the £5.2 billion earmarked for flood defences over five years should be brought forward for schemes that are ready to go.

The committee’s chairman, Lord Deben, said: “The UK is facing its biggest economic shock for a generation. Meanwhile, the global crisis of climate change is accelerating.

“We have a once-in-a-lifetime opportunity to address these urgent challenges together; it’s there for the taking.”

He said a green recovery was the only way out of the “terrible” situation of Covid-19 and the economic crisis, that would create resilience, jobs and prosperity – but the “window of opportunity is closing already”.

“What is now happening is a real opportunity to make a change which will be remembered forever as the great leap forward, which really could be done, but it is now, it isn’t tomorrow,” he said.

Key priorities for investment and action in the UK include:

– Insulating homes to make them warmer and cheaper to heat, as well as measures to ensure they do not overheat as temperatures rise, for example by improving shading through trees and ensuring better ventilation.

There is also a need to boost the use of clean heat pumps and to bring in proposed standards now for new buildings to be low carbon and water efficient.

– Woodland planting and restoring peatland to store carbon and protect against future climate risks such as flooding,  restoring parks and planting trees in cities and towns.

– Making it easier for people to walk, cycle and work from home, with investment in safe spaces for walking and cycling, more bike parking and shared bike schemes, and prioritising investment in 5G and broadband over improving the road network.

The committee’s report also called for training programmes, for example for builders and plumbers to install heat pumps.

And the highly skilled North Sea oil and gas workforce could be retrained and redeployed in areas such as technology to capture and store carbon emissions from power plants and industrial processes.

The Government is also urged to encourage the public to stick with positive behaviours such as walking and cycling, and to invest in science and innovation in technology to help tackle climate change.

The report also calls for any bailouts of polluting industry to have “green strings” attached and for taxes to be used to drive emissions reductions – for example increases on fuel duty – with the potential for carbon taxes able to raise £15 billion a year over the next decade.

A Government spokesman said: “We agree with the committee that tackling climate change should be at the heart of our economic recovery. ”

He said the UK was investing to deliver more offshore wind than any other country and to reduce emissions from homes and industry.

And he said: “We believe that the actions we need to take to achieve our zero emissions target can help to deliver a stronger, cleaner, more sustainable and more resilient economy after this pandemic – and already there are over 460,000 UK jobs in low-carbon businesses and their supply chains.”