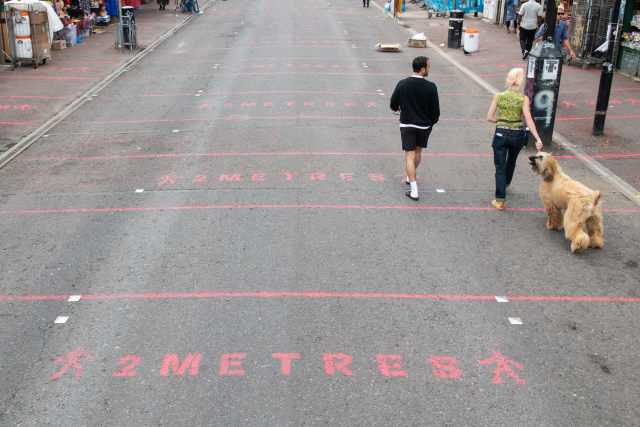 The two-metre rule on social distancing will remain in place in Scotland, Nicola Sturgeon has said, though the Scottish Government has asked its scientific advisory group to review the measure.

Ms Sturgeon said her administration has asked in what settings and circumstance it might be possible “to accept the risk of people not keeping to a two-metre distance”.

The advisory group is expected to report to the First Minister by July 2.

She said: “Until then, the position here in Scotland remains the same. We are advising people to maintain two metres’ physical distancing.

“Any changes announced today for other parts of the UK, while we will look at the evidence underpinning those very carefully, will not apply here at this stage.”

Prime Minister Boris Johnson announced on Tuesday that the rule will be relaxed to “one metre-plus” from July 4 in England.

Giving the daily Covid-19 figures, the First Minister said a total of 2,476 patients have died in Scotland after testing positive for coronavirus, up four from Monday.

A total of 18,182 people have tested positive for the virus in Scotland, up 12 on the previous day.

There are 865 people in hospital with confirmed or suspected Covid-19, a decrease of two in 24 hours, while 21 people are in intensive care, up six.

Ms Sturgeon told the briefing she will announce more details on easing lockdown restrictions on Wednesday, ahead of when she had planned to do so.

She said: “Tomorrow, I’ll be able to provide further detail on the timing of some of the specific steps in that journey.

“I’ll be able to do so tomorrow ahead of when I thought just a few days ago that might be possible.”

Three months on from the lockdown measures being imposed, the First Minister said it has been the “most challenging” period in the lifetime of most Scots.

While saying “we still have work to do” and the virus will pose a risk for some time to come, the First Minister added: “It’s also important to remind ourselves of the progress that we’ve made.”

“Today we’re in a very different position. Hospital admissions which at one point were at 200 a day are currently in single figures every day.

“The number of people in intensive care has fallen by 90% and while it is the case that one person dying from this virus is one too many, we’ve also seen a very significant and sustained decline in the number of those deaths.”

The NHS did not “come close” to being overwhelmed, Ms Sturgeon said, crediting the efforts of the Scottish people for the progress made in suppressing the virus.

The pandemic has shown “the very best of Scotland”, she said, adding: “Our communities have rallied together in support of those in need, to check in on neighbours, to help people with shopping or simply to offer a friendly face.”