Spit guards ‘not an effective means to prevent Covid-19’ 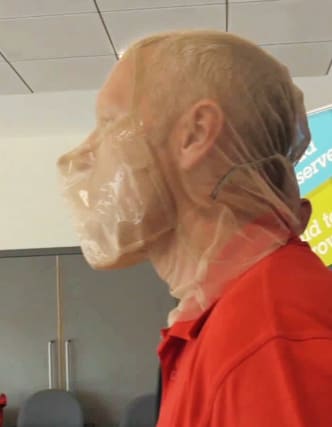 Spit hoods placed on the heads of suspects to reduce the risk of police officers being infected with coronavirus do not offer “effective” protection, their manufacturers said.

Amnesty International has urged the Police Federation to retract a recommendation that every officer should carry the hoods during the pandemic and suspend roll-out following the admission.

In March, the Police Service of Northern Ireland (PSNI) said it would deploy the equipment in custody suites where it questions suspects.

Organisations which represent officers had called for them to protect their members from infection.

The guards, made of mesh and plastic, are placed over the head of a person who is threatening to spit or bite officers.

The representative body for officers, the Police Federation, has called for the equipment to be introduced amid reports of constables being intentionally coughed at by people who said they had coronavirus.

In April, a representative of the federation told the Home Affairs Select Committee that spit hoods should be “in the pocket of every single police officer” to protect from the “appalling weaponisation of Covid-19 by some individuals”, a recommendation which was subsequently endorsed by the committee.

The Spit Guard Pro model is the most widely used spit hood within policing but Amnesty said it did not protect against transmission of the virus.

The PSNI revealed to Amnesty that the manufacturers explicitly declare that spit hoods provide no protection against Covid-19 spread, stating: “The product will not prevent aerosols from coughing or sneezing and is therefore not an effective means to prevent Covid-19.”

Mr Feeley-Sprague added: “This new admission from the manufacturers that the devices will not stop the spread of this deadly virus is startling, especially for any police officers who might have previously been under the impression that these devices would help keep them safe.

“The pandemic has been used as cover to roll out these controversial constraint devices, but we would urge police commissioners and chief constables to look again at the dangers posed to everyone involved.

“Spit hoods could actually be seen as an un-safety device and police chiefs should make it crystal clear to all their officers spit hoods do not offer any protection from Covid-19 transmission or infection.

“Police forces across the UK should now withdraw them from use in possible or suspected cases of Covid.”

Amnesty said it had been engaged in correspondence with the PSNI.

Chief Superintendent Sam Donaldson, from the force’s Operational Support Department, said: “The PSNI has issued spit and bite guards as a temporary measure for use during the Covid-19 pandemic.

“We will continue to review this position in light of all available information.”

Since introduction in March until June 23, spit and bite guards have been used 29 times and each incident has been reported to the watchdog Office of the Police Ombudsman in Belfast.