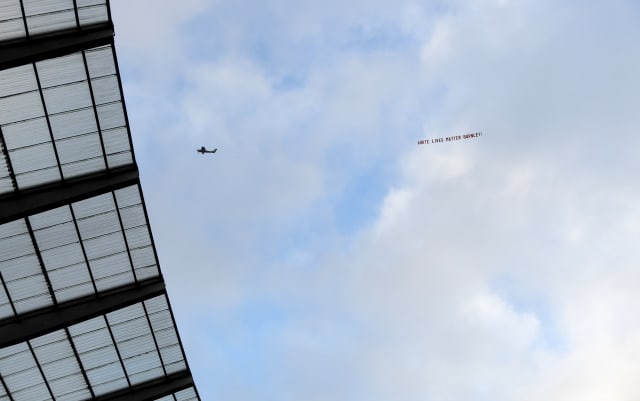 Police are investigating after a banner saying "White Lives Matter Burnley" was flown over a Premier League football match.

The plane flew above the Etihad Stadium in Manchester just after kick-off between Manchester City and Burnley on Monday night.

It happened moments after all players had taken the knee in support of the Black Lives Matter movement.

Chief Superintendent Russ Procter, of Lancashire Police, said: "We are making inquiries to establish the full circumstances surrounding this incident and we will then be in a position to make an assessment as to whether any criminal offences have taken place.

"We recognise that this banner will have caused offence to many people in Lancashire and beyond, and we continue to liaise closely with our partners at both the club and in the local authority."

Air Ads, the firm believed to have been hired to fly the banner, is based in a hangar at Blackpool Airport.

The airport, run by Blackpool Council, said it would suspend banner flights from the facility.

Airport manager Stephen Smith said: "The decision to fly the banner was taken entirely by the banner-flying company without the knowledge or approval of the airport or Blackpool Council.

"Due to the nature of the activity, banners are not checked before take-off and the content is at the operator's discretion.

"The incident was reported to the police yesterday evening and the Civil Aviation Authority has been notified.

"Blackpool Airport are investigating the banner operator in question and further action will be taken by the board tomorrow.

"Following an emergency review this morning, Blackpool Airport will suspend all banner-towing operations at the airport with immediate effect, and we would suggest that other airports should also consider this approach in light of what has happened at Blackpool."

There was no response from calls made to Air Ads by the PA news agency.

A man at the hanger, an ex-pilot who did not want to be named and claimed to know the Air Ads pilot, said the firm had been run by Alan Elliott, who died a few weeks ago.

He claimed Mr Elliott's family had taken a back seat and a pilot was hired when they had orders to fly banners.

He said banners are made to order, with flight costs of around £700, and the pilot would be paid around £100 per flight.

He added: "We would assume whoever paid for the banner would get done for it."

Burnley Tory MP Antony Higginbotham also condemned the message, saying on Twitter: "Last night's awful stunt was done by a small minority to offend and cause hurt to so many in our community.

"Those responsible should be ashamed of their desire to divide. They don't speak for our town and @BurnleyOfficial has my full support in taking action against them."