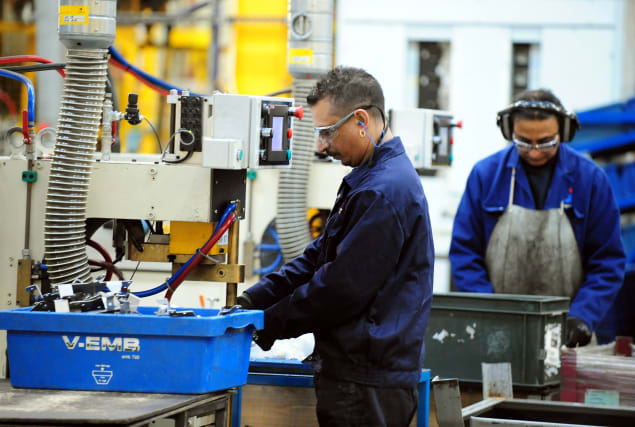 The UK’s pummelled private sector has started to see some green shoots this month, as the manufacturing sector started to show some slim growth again.

The IHS Markit/CIPS Flash UK composite purchasing managers’ index (PMI) hit 47.6 in June, up by 17.6 since the end of May.

It is a four-month high for the closely watched measure, which is often considered a bellwether of the economy.

It returned the figure to more normal levels after unprecedented lows as the economy closed down in April to slow the spread of the coronavirus.

“June saw a record rise in the PMI for a second successive month, confirming that the economy is moving closer to stabilising after the worst of the immediate economic impact from the Covid-19 pandemic was felt back in April,” said IHS Markit chief business economist Chris Williamson.

It does not mean that the UK has returned to positive territory quite yet. Anything below 50 is still considered to be a contraction.

But manufacturers had more to be happy about, as they showed hair-fine growth, with a score of 50.1.

At 47.6, the composite figure was much higher than had been expected.

Analysts at Pantheon Macroeconomics has predicted that PMI would hit 42 in June, with analysts on average predicting a score of 41.

After the figures were released, Pantheon’s chief UK economist Samuel Tombs said that they showed: “Solid progress, though the last miles of this marathon recovery will be the hardest.”

The news comes a week after the Bank of England said that the impact of the coronavirus lockdown might be less severe than first thought as restrictions ease.

It said that GDP is set to plunge by around 20% in the first six months of this year, compared to previous estimates of a 27% drop.

At IHS Markit, analysts are expecting to see an 11.9% contraction in the economy this year. But its recovery, with 4.9% growth forecast next year, is much more cautious thank the Bank’s 15% prediction.

Mr Williamson said: “While confidence is rising that the economy will soon return to growth as the lockdown continues to ease, the longer term recovery prospects remain highly uncertain.

“Some of the recent gains in the PMI reflect short-term bounces as businesses returned to work, but demand clearly remains weak, as indicated by a further steep decline in backlogs of orders and an ongoing fall in new orders.

“Many Covid-19 restrictions and social distancing measures will also need to stay in place until an effective treatment or vaccine is available, curbing demand in a variety of service sectors in particular.

“Uncertainty over recovery prospects and job prospects also mean demand for many goods, especially non-essential big ticket items, is likely to remain weak for many months, with Brexit uncertainty also continuing to cast a shadow over the economy.”