Lockdown easing in England but coronavirus fight far from over, Johnson says 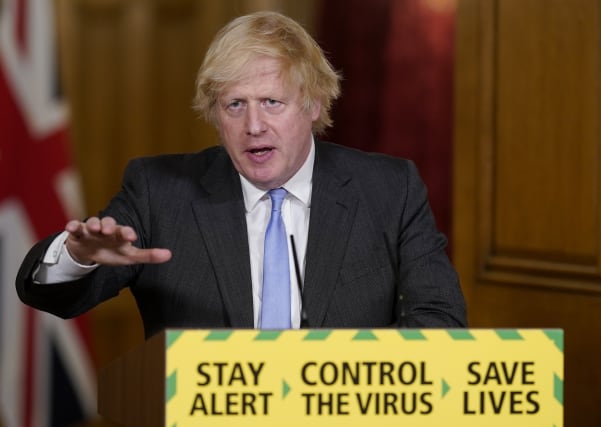 Families can be reunited, drinkers can enjoy a trip to the pub and people can go on holiday in England from July 4, as Boris Johnson announced a significant relaxation of lockdown restrictions.

The Prime Minister claimed the “national hibernation” was ending, but the Government’s own scientific experts signalled that people would still need to accept significant restrictions on their way of life for months to come because the threat posed by coronavirus had not gone away.

Mr Johnson acknowledged the fight was “far from over”, but said “life is returning to our streets”.

Under the changes, indoor gatherings involving two separate households will be permitted – including the possibility of staying overnight – but social distancing will need to be maintained, meaning no hugs with friends or relatives.

Where the two-metre rule cannot be applied, it will be replaced with a “one metre-plus” measure, with the protection offered by the physical distance enhanced by other mitigation measures such as the use of face coverings, increased hygiene or layout changes in premises.

The hospitality industry had warned that pubs and restaurants would go to the wall if the measure remained in place.

The Prime Minister said “difficult judgments” had to be made and “every step is scrupulously weighed against the evidence”.

He added: “Our principle is to trust the British public to use their common sense in the full knowledge of the risks, remembering that the more we open up, the more vigilant we will need to be.”

Under the changes, two households of any size will be permitted to meet in any setting – inside or out.

“It will be possible to meet one set of grandparents one weekend, the others the following weekend,” he said.

As large parts of the economy reopen:

– Pubs and restaurants will be limited to table service and will be asked to collect customers’ details so they can be traced if there is a coronavirus outbreak.

– Hairdressers will be able to reopen with precautions including the use of visors.

– The domestic tourist industry will be boosted by the reopening of accommodation including hotels, B&Bs and campsites along with most leisure facilities and attractions such as theme parks.

– Outdoor gyms and playgrounds will be returned to use.

– Cinemas, museums and galleries will be allowed to open their doors again.

– Places of worship will reopen, with weddings of up to 30 people allowed – although any receptions afterwards would be severely limited as only one other household would be allowed to join the bride and groom.

Live performances at concert halls and theatres are also still banned, partly due to the risk posed by singing in spreading the virus.

Mr Johnson said the changes will help restore a sense of normality after “the toughest restrictions in peacetime history”.

He told MPs: “Today, we can say that our long national hibernation is beginning to come to an end and life is returning to our streets and to our shops, the bustle is starting to come back and a new, but cautious, optimism is palpable.”

But he said the virus has not gone away and the Government “will not hesitate to apply the brakes and re-introduce restrictions – even at national level – if required”.

Despite Mr Johnson promising that detailed guidance for business would be published on Tuesday, officials later admitted it could be Wednesday before firms were told what steps they would need to take to safely reopen.

At the final daily Downing Street press conference – the regular sessions have been cancelled by Number 10 – scientific experts sounded a cautious tone about the changes.

England’s chief medical officer Chris Whitty said the decision to reduce the two-metre rule was a “reasonable balance of risk”, but stressed the need for mitigation measures to be taken seriously.

“We may at some point say that particular bit of the decisions that were taken is too much of a risk with the benefit of hindsight and we have to go back on it,” he added.

He warned that the country could have to cope with Covid-19 into 2021.

He said: “I would be surprised and delighted if we weren’t in this current situation through the winter and into next spring.”

Chief scientific adviser Sir Patrick Vallance said: “The disease is growing across the world. It is coming down in the UK but it hasn’t gone away.”

– The total number of deaths in the UK involving Covid-19 has risen to more than 54,000, according to PA news agency analysis.

– There have been more than 65,000 excess deaths from all causes in the UK since the outbreak began, compared to the five-year average.

Responding to Mr Johnson’s statement in the Commons, Labour leader Sir Keir Starmer said the Government was “trying to do the right thing and in that, we will support them”.

But “any unlocking carries risks” and “it has to phased, managed and carefully planned”.