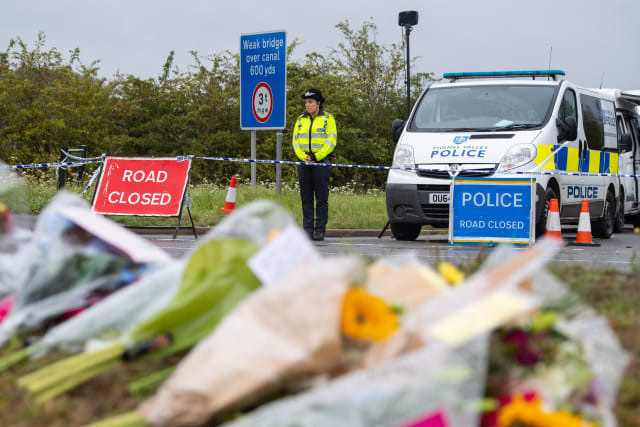 A brave young police officer was killed “in the line of duty” in “truly shocking circumstances” as he attempted to stop three teenagers from stealing a quad bike, a trial has heard.

Pc Andrew Harper was responding to a reported theft four hours past the end of his shift when his ankles got caught in a tow rope attached to the suspects’ getaway car.

He was dragged for more than a mile of winding country road with his uniform gradually stripped from his body.

Such were the extent of Pc Harper’s injuries that an eyewitness said he thought the suspects were towing a deer carcass behind their vehicle.

The 28-year-old policeman had become dislodged by the time his colleague, Pc Andrew Shaw, came across him “barely alive”. Pc Harper died at the scene a short time later.

The Old Bailey trial heard Henry Long, 19, drove at an average speed of 42.5mph along the Admoor Lane in Berkshire, near Reading, on the evening of August 15 last year, in such a fashion that the stricken officer was “swung side-to-side like a pendulum in an effort to dislodge him”.

“During the course of that high-speed journey, and until at last he became disentangled, his police uniform was quite literally ripped and stripped from his body.

“Almost naked by this point, Pc Harper was left as you can imagine with the most appalling of injuries, from which he died there on the road.

“It was a senseless killing of a young police officer in the line of duty, a young man who was doing no more than his job.”

Long has admitted the manslaughter of the Thames Valley Police officer, but has denied intending to kill him.

He is on trial for murder, along with Jessie Cole and Albert Bowers, both 18, who were his passengers.

Cole, from Aldermaston, and Bowers and Long, both from Mortimer, Reading, have admitted conspiring to steal the quad bike.

Jurors were told they had been trying to escape police, having been caught in the act of stealing the bike from Bradfield Southend at 11.17pm.

Mr Laidlaw said the thieves were determined to take the vehicle “whatever the cost”, having been disturbed earlier in the day.

Not only did they have gloves and masks to avoid detection, they had tools with them which might easily have been used as weapons, it was claimed.

Pc Harper and his crewmate responded to the reported theft despite it being well beyond the end of their shift.

Mr Laidlaw said: “Going beyond the call of duty, as it were, would cost Andrew Harper his life.”

The court heard the defendants had made off with the expensive Honda quad bike, secured to their Seat Toledo getaway car by a tow rope tied around its handlebars, but came face-to-face with the police on Admoor Lane.

Pc Harper got out of the car to apprehend Cole, who disconnected the tow rope from the quad bike and dived into the Seat, which had manoeuvred around the police car to escape, jurors heard.

The prosecutor said: “What of course Pc Harper had not seen, but each of these defendants would have known, was that the loop of strapping now on the ground and being dragged behind the Seat was still attached to the hinge of the boot lid of the vehicle.

“Tragically, at that very moment and still in the act of chasing Jessie Cole down, Pc Harper must have quite unwittingly stepped, with both feet, into the loop made of the strapping trailed behind the Seat.

“Henry Long sped off, Pc Harper was lassoed around his ankles by the loop of the strap. It will be obvious to you all that none of the defendants could possibly have intended that that should happen.

“But the prosecution case is that it must have been very quickly clear to Henry Long, who was after all at the wheel of the car, that the vehicle was now dragging somebody behind it.”

An eyewitness initially thought the Seat was towing “the carcass of a bloodied deer”, but quickly he realised it was a person trapped by both ankles being dragged around the road and striking the kerb, Mr Laidlaw said.

Pc Shaw made the grim discovery a short time later.

Mr Laidlaw said: “He was barely alive, and Pc Harper died soon after where he lay, in Ufton Lane, in the company of fellow officers who had tried desperately to save him.”

The three defendants were arrested later at a nearby travellers’ site.

Jurors have been told the case is being re-tried after the original trial, which began in February, was abandoned due to the coronavirus pandemic.

Pc Harper’s parents and his widow Lissie Harper were among those attending the court on Tuesday.

The trial continues and is due to last up to five weeks.