Face coverings should be ‘matter of course’ as 2m rule relaxed 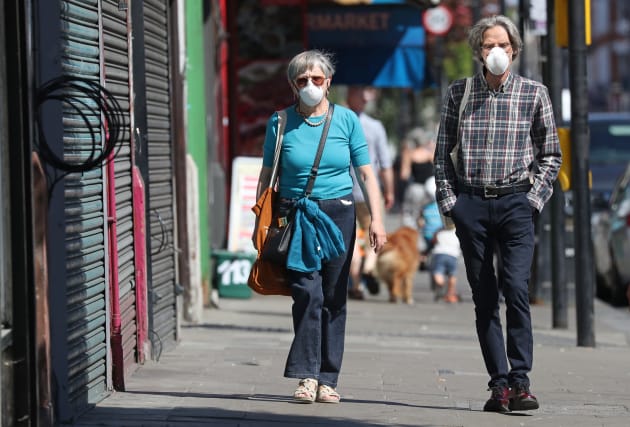 The public should wear face coverings “as a matter of course”, leading doctors have said as the Government eased the two-metre social distancing rule.

Prime Minister Boris Johnson introduced the concept of “one metre plus” – where people can get closer than two metres if they use “mitigation measures” – such as wearing a face covering, being side to side or enhanced hygiene measures.

But he stressed that two metres is still “preferable”.

As a result of the easing, the British Medical Association (BMA) said the Government should now “require the public to wear face coverings”.

Dr Chaand Nagpaul, chair of council at the BMA, said: “The crucial aspect of this reduction in distancing is the Prime Minister’s acknowledgement that it comes with conditions attached – one of these is the wearing face coverings. The BMA believes face masks or coverings should be worn by the public now as a matter of course, in order to keep the risk of infection as low as possible.

“It is already mandatory to wear coverings on public transport and we believe the Westminster Government should now require the public to wear face coverings and ensure people have access to enough proper masks or coverings, as has been done in other countries.”

During the final daily Downing Street briefing on Covid-19, Mr Johnson said: “We can make a change to the guidance on two metres, which kept us safe while transmission of the virus was high, which can now be modified.

“Having considered all the evidence, while staying at two metres is preferable, we can now move to one metre plus where it is not possible for us to stay two metres apart.

“That means staying one metre apart plus mitigations which reduce the risk of transmission and these precautions could include installing screens, making sure people face away from each other, providing handwashing facilities, minimising the amount of time you spend with people outside of your household and of course being outdoors.

“On public transport, it already means one metre plus, it means wearing a face covering for mitigation as everybody I think now understands.”

Prof Whitty stressed that there was a risk coronavirus could start to increase in its spread as he called for people to take mitigation measures if they are unable to stay two metres apart.

“A lot of the changes are about emphasising things that we can do and it is really critical that individuals and firms take these really seriously,” he said.

“Because if we don’t take them seriously, then chains of transmission between households will be reestablished.”

Prof Whitty said such mitigation involved not sitting face to face or even “physical barriers”.

He added: “To be really clear, it is absolutely critical that every individual, every household and every firm takes these precautions seriously.

“If that does not happen, we will go back to a situation where transmission starts to rise again.”

He added: “If people hear a distorted version of what’s being said, that says ‘this is all fine now, it’s gone away’ and start behaving in ways that they normally would have before this virus happened, yes, we will get an uptick for sure.

On the changes to the two-metre rule, Prof Whitty said it was a “balance of risk”.

“I think that this is a reasonable balance of risk,” he said, but it was “absolutely not risk-free”.

“We may at some point say that particular bit of the decisions that were taken is too much of a risk with the benefit of hindsight and we have to go back on it.”

Sir Patrick added: “Two metres is safer than one metre if it is unmitigated. But if you add the mitigations, if you start looking at things like orientation – being side by side or back to back – is ventilation good? Are face coverings been worn? Are there screens in place?

“The number of people in an enclosed environment is an important thing – you don’t want to pack lots of people in irrespective of whether they’re one metre or two metres apart, the time in which people spend in certain environments and the environment itself. Those are all features which are important.

“One metre with migiations in place can be the equivalent risk to two metres.”