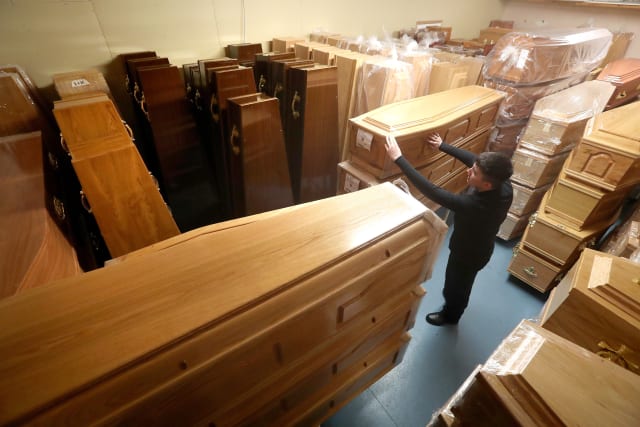 Deaths involving coronavirus across all age groups in England and Wales either fell or stayed the same for the first week since the pandemic started, the Office for National Statistics (ONS) said.

In all but one age group where deaths occurred (ages 25-29, where one death was recorded in both weeks), the number of deaths fell in the week ending June 12 compared with the previous seven days.

There were zero deaths recorded in the age groups 0-9 and 15-24 for both weeks.

And no deaths were recorded in ages 10-14, down from one death the previous week, and ages 30-34, down from three.

It is the first time deaths involving Covid-19 did not rise week on week in any age group since numbers started being recorded.

For the first time in three months, the number of weekly deaths fell below the five-year average in Wales.

There were 14 fewer deaths than what would usually be expected for the week ending June 12, the ONS figures show.

It is the first time the figure for Wales has been below the average since the week ending March 13.

The number of deaths in hospitals was below the five-year average for the second week in a row.

There were still excess deaths registered in both care homes and private homes during this week, although the number was down on the previous seven days.

Tuesday’s figures take the total number of deaths involving Covid-19 in the UK past 54,000.

The ONS said 48,866 deaths involving Covid-19 had occurred in England and Wales up to June 12 (and had been registered by June 20).

Including figures published last week for Scotland and Northern Ireland, it means that, so far, 53,738 deaths have been registered in the UK where Covid-19 was mentioned on the death certificate, including suspected cases.

In addition, 351 hospital deaths between June 13 and 21 in England and Northern Ireland take the overall total to 54,089.

The number of excess deaths in the UK since the coronavirus outbreak began has passed 65,000.

There have been 59,252 excess deaths in England and Wales between March 21 and June 12, the ONS said, following figures last week showing the equivalent numbers for Scotland and Northern Ireland.

Together, this means the total number of excess deaths in the UK across this period now stands at 65,101.