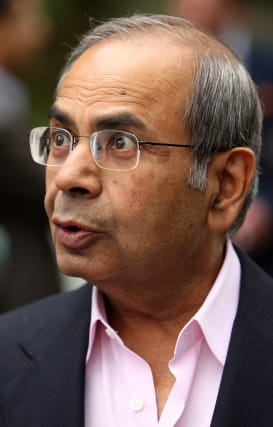 The billionaire Hinduja brothers are locked in a bitter High Court battle over the family’s vast assets.

Srichand Hinduja, 84, is suing his brothers Gopichand, Prakash and Ashok over a July 2014 letter, signed by all four of them, which states that “assets held in any single brother’s name belong to all four”.

He is seeking a declaration that the letter has no “legal effect, whether as a will, power of attorney, declaration of trust or other binding document”.

A High Court judgment delivered on Tuesday disclosed that the family members are also embroiled in litigation in Switzerland over the control of Hinduja Bank, “an asset in Srichand’s sole name”, as well as proceedings in Jersey which are being conducted in private.

Mrs Justice Falk said Srichand Hinduja, who she described as “the current patriarch of the family”, has taken legal action against his three brothers to “determine the validity and effect” of the letter.

In her ruling, she said: “The 2 July (2014) letter includes statements to the effect, among other things, that the brothers appoint each other as their executors, and that assets held in any single brother’s name belong to all four.”

The judge added that Srichand had said in a 2016 witness statement that “the July letter does not reflect his wishes and that the family’s assets should be separated”.

Mrs Justice Falk ruled that Srichand, who is said to be suffering from a form of dementia, lacks capacity to give instructions to his lawyers and appointed his daughter Vinoo to act as his “litigation friend”, conducting the proceedings on Srichand’s behalf.

The three defendants’ lawyers had argued that there was no evidence that Srichand is not able to “understand, retain and use or weigh information, or to communicate decisions”.

They also said that Vinoo “has her own separate financial interest in pursuing the proceedings, and that she would not be in a position to form an independent and objective judgment about the merits of the claim and Srichand’s best interests”.

Mrs Justice Falk said: “The defendants do not dispute that Srichand lacks capacity, and indeed have relied on it as a basis for seeking to take control of Hinduja Bank, an asset in Srichand’s sole name, relying on the July letter. This is the subject of proceedings in Switzerland.”

The judge said she was “satisfied that Vinoo can act fairly on behalf of Srichand and that she does not have an adverse interest”.

She continued: “It is said on Srichand’s behalf that, if the defendants’ position on the July letter is correct, then that throws Srichand’s estate and tax planning into disarray, calls into question the validity of his wills, potentially displacing the appointment of his executors, and may also make the acts of his attorneys invalid.

“If any part of this is right, and I did not understand the assertion to be challenged, then proceedings that seek to determine the legal effect of the July letter, and address the uncertainty that currently exists, cannot rationally be said to be contrary to Srichand’s interests.

“In principle it must be in Srichand’s interests to have the effect of the July letter definitively determined, and these proceedings would appear to be an appropriate step for his attorney to take on his behalf.”

Srichand and Gopichand Hinduja and their family are worth about £16 billion, according to the most recent edition of the Sunday Times Rich List.

The brothers dropped into second place on the list behind inventor Sir James Dyson, having suffered losses of £6 billion since last year.