‘Pub hosts’ and Perspex screens: What will the ‘new normal’ look like in bars? 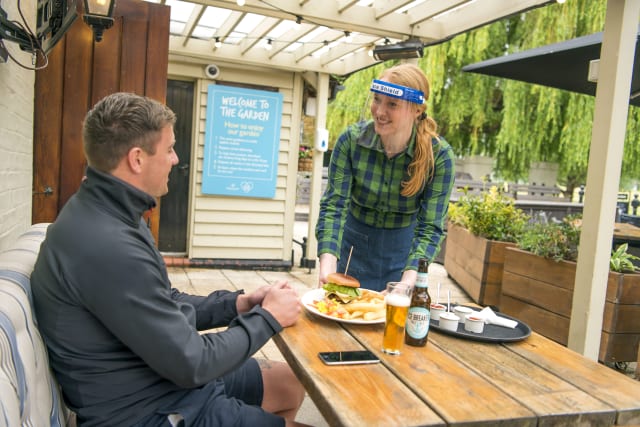 Supermarket-style queues, “pub hosts” and Perspex screens at the bar will greet customers waiting to enjoy their first pub pint since lockdown began.

Two of the most popular British pub chains, Wetherspoons and Greene King, have outlined how their outlets will look as they reopen their doors from July 4 in England, while others have not been able to make plans.

A spokesman for one independent pub, the Gloucester Old Spot in Cheltenham, said they are “all guns blazing” for a reopening but need Government guidance for the sector beyond the new one-metre rule.

So what can people expect under the “new normal”?

Many publicans have said they will be operating a pre-booking system to control customer numbers, and expect supermarket-style queues at the door.

Brewer Greene King said it will be introducing a “pub host”, who will manage the queues, greet customers from one metre away, and show them to their tables.

British pub giants Wetherspoons and Greene King have said customers will be encouraged to use phone apps to order and pay for drinks, to avoid people congregating at the bar.

Both chains have also said their bars will be fitted with perspex screens, hand sanitisers, and floor stickers indicating a one-way system for moving around the pub.

Following the Government’s reduction of the two-metre social distancing restriction, pubs will be spacing tables at least one metre apart.

Along with other industry leaders, trade union group UKHospitality (UKH) put forward proposals to ministers, including that customers should be served individually-wrapped sauces and condiments rather than sharing bottles.

Some pubs have said they will be handing out one-time-use menus which customers can take away or dispose of at the venue.

It added that a “pub safe monitor” will be cleaning surfaces and tables, and customers will be asked to flip “one in, one out” red and green indicators at the entrance to toilets with their elbow as they enter and leave.

– ‘New normal’ for bartenders and servers

Wetherspoons staff will be undergoing temperature checks and filling in health questionnaires before each shift and could be wearing masks, gloves, and eye protection.

When they serve drinks, they will only be touching the bottom of the glass in order to avoid transmission via the surface.

The Government has not yet said whether there will be a limit on the number of drinks one person can buy.

A spokesman for Wetherspoons said staff will ensure “customers are served responsibly”, although they hinted there would be no limit on the number of orders a customer can make.

“Before lockdown you couldn’t order three pints for yourself at one time and that will be the case now,” they said.