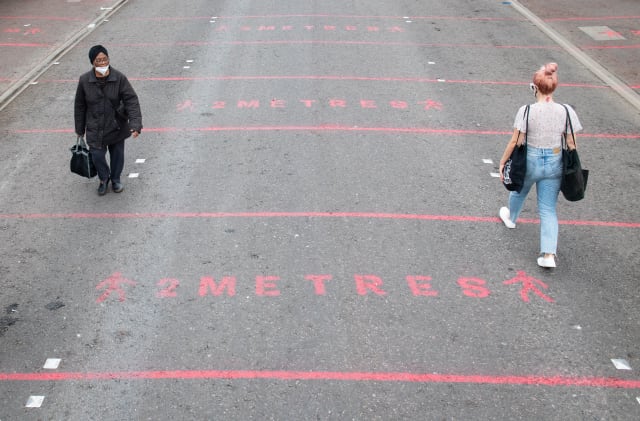 “Mitigation measures” will be critical as part of the new one metre-plus rule on social distancing, scientists have said.

Prime Minister Boris Johnson announced that the two-metre rule will be eased, replaced with a “one metre-plus” measure, with the protection offered by the physical distance enhanced by other
mitigation measures such as the use of face coverings, increased hygiene or layout changes in premises.

Experts said that such measures reduce the risks as people get closer to one another.

Cath Noakes, professor of environmental engineering for buildings at the University of Leeds, said: “It remains the case that two metres is safer than one metre, but in some cases mitigation measures can be taken to reduce risks at a closer distance.

“The announcement by the Prime Minister today recognises the critical importance of the mitigation measures that will be necessary.

“Business owners and employers should ensure that spaces are well ventilated, with air flow from windows or a mechanical ventilation system diluting any pathogen spread in the air.

“The way people sit and stand can have an impact on the way the virus spreads. If people are face-to-face, they are at an increased risk compared to being side-by-side or back-to-back. People should still try to maintain greater distances when they are face-to-face.

“Duration of exposure is important. A brief exposure at close distance is unlikely to pose a significant risk, but prolonged duration in an enclosed space is much more risky.

“As we have seen in the supermarkets, physical screens and barriers can be installed. People can wear face coverings. Employers can use technology to reduce contact between members of the public and staff.

“In the hospitality sector, there are apps where people can pre-order food and drink. The time employees and the public spend in crowded or busy environments increases the risks they face. Employers will need to think about steps to safeguard their staff, particularly those working with the public.

“And all of this is influenced by the level of virus in the community. If we can keep the overall level of infection down, the role of mitigation eases.

“Put simply, the chance of coming into contact with someone who is infected – or touching a surface they have contaminated – is low when the level of infection is low. That’s why reducing social distancing and relaxing other measures need to be underpinned by an effective test, trace and track system, to contain any outbreaks of the disease.”

Shaun Fitzgerald, visiting professor at the University of Cambridge’s Department of Engineering, added: “The key thing about reducing the risk of transmission is that it is not all about the distance, whether that be two metres or one metre.

“There are other mitigation measures which are available including: limiting the duration of close proximity; limiting the number of people in a given space; limiting the number of contacts between households; use of face coverings; use of screens; increasing rates of ventilation; talking more quietly; orientation of one person to another; use of technology to reduce contact such as more transactions or ordering things from your phone; and of course regular cleaning and hand-washing.

“If we think of all these potential mitigation measures as levers available to help control the pandemic, then I can understand why the particular combination chosen at any moment in time might vary depending on the circumstances and of course where we are on the curve.”