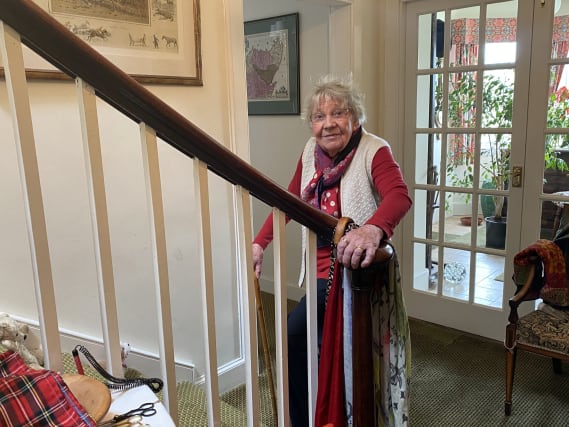 A 90-year-old woman aiming to raise money for charity by climbing her staircase to the height of Suilven mountain has finished her challenge.

Margaret Payne finished her 282nd climb of her staircase at her home in Ardvar, Sutherland, raising more than £347,000.

Having started on Easter Sunday, Mrs Payne pledged to climb the 731 metres to raise money for the Highland Hospice, NHS Highland and RNLI.

At the halfway point, Mrs Payne told the PA news agency: “The response has been absolutely wonderful, the amount of money we have had donated has been incredible.

“I am completely overwhelmed and humbled by the generosity of everyone who has donated to this amazing cause.

“I would like to thank each and every one for their heart-warming messages of support and generous donations.”

She said: “I have definitely become a bit quicker, which must mean I am a bit stronger.

Encouraged by well-wishers, Mrs Payne was also congratulated by the Prince of Wales, known as the Duke of Rothesay in Scotland, who wrote: “My wife and I just wanted to add to what I suspect is a very large number of messages of support by saying how inspiring it has been to witness the huge success of your fundraising efforts.

“These past few months have seen our country face immense challenges. Many people are grieving the tragic loss of their loved ones.

“The marvellous community spirit, for which Scotland is so renowned, has never been so much in evidence as people across our society have gone the extra mile, have put others first and have sacrificed their own comfort for the common good.”

The challenge was Mrs Payne’s way of saying thank-you to NHS and hospice staff who took care of her late husband Jim, previously saying: “They have been amazing, each day they are risking their lives.

“My husband died at Christmas and the NHS were absolutely wonderful. So it was a way of saying thank-you.”

Andrew Leaver, head of fundraising for the Highland Hospice, said: “We are delighted with Margaret’s fundraiser and so overwhelmed with the level of public interest and support.

“Margaret has shown real determination and been an inspiration to old and young alike.

“We’re delighted she can now take a well-earned break and really can’t say thank you enough to her.”