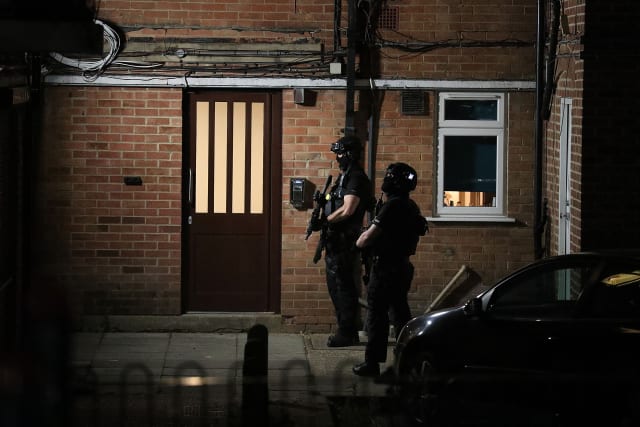 The 25-year-old arrived in the UK as a refugee, having fled the deadly civil war in his home country of Libya in North Africa.

According to The Sun newspaper, he was granted asylum for five years in 2018.

Saadallah was known to security services prior to Saturday’s fatal knife attack in a Reading park which left three people dead.

He briefly came to the attention of MI5 last year, but the information provided did not meet the threshold of investigation.

A security source said MI5 had received intelligence he planned to travel abroad, possibly for terrorism purposes, but the threat was found to be insubstantial.

Saadallah was jailed for 25 months and 20 days in October for various non-terror-related offences dating back to November 2018.

The offences included racially aggravated common assault – after he called a police officer a “slave” and spat in her face – carrying a bladed article and assaulting an emergency worker.

A month earlier in September 2019 he was jailed for 10 weeks after he admitted spitting at District Judge Sophie Toms as she sentenced him at Reading Magistrates’ Court in March for two previous convictions.

In January 2019 he was also involved in an altercation with a security guard, during which he struck the man in the face with his belt, court documents show.

He was convicted of affray and assault by beating an emergency worker, and sentenced to seven months’ imprisonment in October.

Security guard Sydney McDonald, 65, told the PA news agency on Sunday that he had been assaulted by the suspect last year when he stopped him from shoplifting from the Sainsbury’s store where he works in Friar Street in Reading town centre.

Mr McDonald said he recognised the man from when he was attacked with the belt by a man brandishing a broken wine bottle.

Saadallah, who had lived at Basingstoke Road in Reading, had his overall sentence reduced to 17 months and 20 days’ imprisonment through the Court of Appeal in March this year.

One of the appeal judges who gave the judgment, Mr Justice Goss, noted Saadallah’s various mental health issues in reducing the sentence.

Court documents showed he had a history of debt and homelessness, and previously suffered from post-traumatic stress disorder, depression and a personality disorder.

In that judgment, Mr Justice Goss said the judge in his case had “observed that numerous outside agencies had attempted to help him”.

Saadallah was released from prison earlier this month, it is understood, and the Covid-19 pandemic played no part in the decision to free him.

The Sun reported that he left HMP Bullingdon, Oxfordshire, 17 days ago after serving less than half of his sentence.