What is the debate around reducing two metre social distancing? 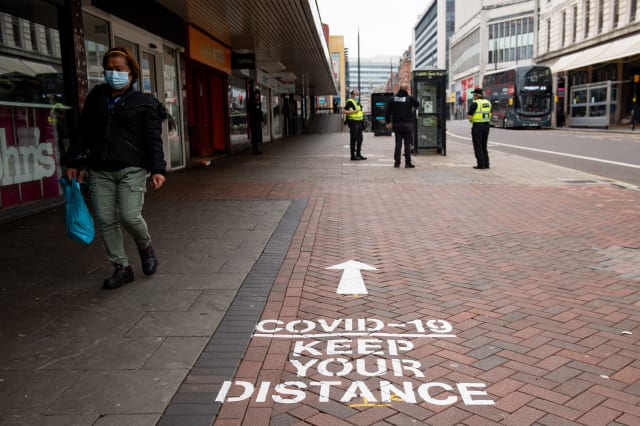 The Government’s decision over whether to relax the two metre social distancing rules in England is expected to be revealed on Tuesday.

It follows pressure from MPs and businesses to reduce the rule to one metre as part of steps to gradually ease the coronavirus lockdown and boost the country’s economy.

Here is an overview of the key points in the debate:

– Why do we have a social distancing rule?

Quite simply, to help stop the transmission of coronavirus.

The virus can be spread via droplets released when an infected person coughs, sneezes or breathes.

Under the current rule people are urged to stay two metres apart from those they don’t live with, when outdoors, in shops or at workplaces, to prevent potential infection.

Regularly washing hands and wearing face masks are other measures that can help limit the spread of the virus.

Scientists have argued that the risk of exposure to the virus reduces with increased physical distance.

The Government’s Scientific Advisory Group for Emergencies (Sage) was told earlier this month that a one-metre distance could carry up to 10 times the risk of two metres.

But experts have also pointed out much is unknown about how far coronavirus can be transmitted via airborne droplets.

Some point out that larger droplets fall to the ground within one metre, but others have highlighted studies indicating smaller droplets can be projected up to eight metres away.

– Who wants the rule changed and why?

The country’s closed bars, pubs and restaurants, have been leading the calls for a one metre reduction in social distancing if they are allowed to reopen from July 4.

The hospitality industry argues that operating with the two metre restriction is not financially viable, due to the limits in place on safe numbers of customers and staff in indoor spaces.

Those working in the sector say a one metre reduction would save thousands of jobs, but have warned that even with this change trade is only expected to be at just over half the level compared to the year before.

– Who else could benefit from changing the rule?

Although primary schools were encouraged to open to more pupils from June 1, many school leaders said they were not able to because of a lack of space for distancing.

Easing the restriction may enable more children to return to their education and also allow parents to return to work, especially those who cannot afford childcare.

– What have politicians said?

Some Tory MPs, including former cabinet ministers Sir Iain Duncan Smith and Damian Green, have urged the Government to reduce the two metre rule on the basis it is essential for the economy.

Shadow health secretary Jonathan Ashworth said Labour would support a reduction of the two metre rule “under certain circumstances”, including the strengthening of other protections such as masks.

– What do the public think?

According to a snap poll by YouGov earlier this month some 58% of people want the rules to be kept at the current distance, while just under a quarter (24%) want it dropped to one metre.

The survey of more than 3,500 Britons also showed that people aged over 65 are more likely to favour a change from two metres to one metre, with younger people erring on the side of caution.

– How will any decision to change the social distancing rule be made?

The Government’s chief scientific adviser Sir Patrick Vallance has said that the two metre rule is “relative” rather than “absolute” and could be changed based on the setting and the prevalence of Covid-19.

He said scientific evidence would form the basis of a policy decision on whether to change the rule.

Prof Chris Whitty, chief medical officer for England, has previously suggested social distancing restrictions could be in place for the duration of the coronavirus pandemic.

The prime minister has said that falling numbers of coronavirus cases gave the Government “more margin for manoeuvre” in easing the two metre rule and emphasised he is “sticking like glue” to his road map for easing the coronavirus lockdown for the hospitality sector from July 4.

Mr Johnson ordered a “comprehensive” review of the regulation in England and was expected to discuss potential changes with the Covid-19 strategy committee on Monday afternoon.

– What rules do other countries have?

Some countries, including France, Denmark and Singapore, have been following a distancing restriction half the measure of the UK limit.

This is because the World Health Organisation (WHO) recommended a “minimum” distance of one metre between people from different households to avoid transmission of the virus.