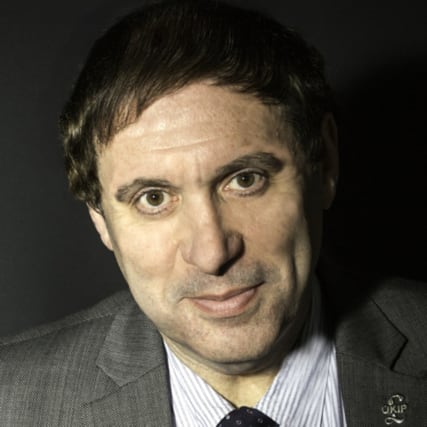 New Ukip leader Freddy Vachha said his party was “back in business” following years of swapping and changing leaders.

Mr Vachha, in an animated speech made in front of Sir Winston Churchill’s statue in Parliament Square, said Westminster politicians should be “quaking” after he vowed to revive the anti-European Union party’s fortunes.

He is the sixth person to take the Ukip helm since Nigel Farage stood down following the 2016 referendum result.

Mr Farage has since gone on to form The Brexit Party, which was seen to have played a part in Boris Johnson’s landslide general election win last year after choosing to stand candidates down in Conservative-held seats.

Gerrard Batten, the former MEP who was the elected Ukip leader for 14 months up until June 2019, was criticised for taking the party in an anti-Islam direction, appointing right-wing activist Tommy Robinson as an adviser.

Under his leadership, the party lost all its MEPs during the European elections in June 2019.

In December, it was revealed that Mr Batten’s successor Richard Braine was sued by the party over allegations of data theft.

Mr Vachha, whose beleaguered party pulled in just 22,000 votes during the election in December, admitted Ukip “went astray quite a few years ago” but said it was now “back on track”.

The 61-year-old said: “We’re back in business, we’re a proper mainstream political party.

“That shower in Westminster should be quaking in their shoes.”

Speaking on the eve of the fourth anniversary of the Brexit referendum result, Mr Vachha said it was “ridiculous” that negotiations with Brussels were still going on.

“We are still enmeshed in the EU, still haggling and arguing with them while we should have just left,” he told those outside Parliament.

As well as growing “ultra-hot” chillies and breeding koi carp, the former MP candidate lists “Nazi Germany” and the “Belgian Congo holocaust” among his hobbies on a CV posted on his Facebook account.

He also claims to speak “American” as a language, along with Urdu, Gujarati and French.

Mr Vachha appeared to distance himself from the party direction fostered by Mr Batten.

“For many years we too had gone astray, focusing on things that were not very important and some of the things we focused on were just plum wrong,” he added.

“We return to our libertarian freedom-loving principles. And under my leadership, that is what we will get.”