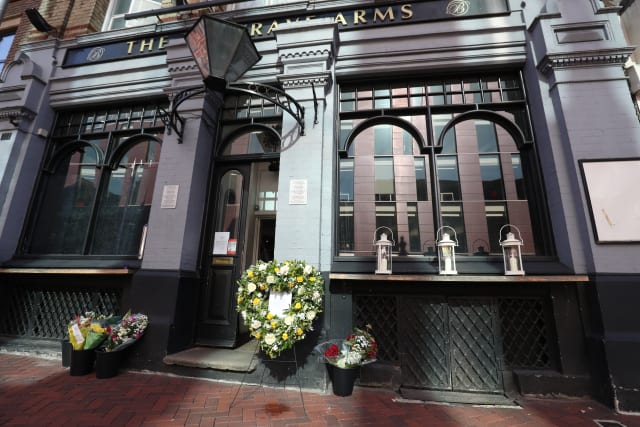 Tributes have been paid to three “genuine and most loveliest” friends who were victims of the suspected Reading terror attack.

They were killed in the incident which happened in Forbury Gardens in the town centre at around 7pm on Saturday.

David Wails was named locally on Monday afternoon as the third man who died, after earlier tributes were paid to Joe Ritchie-Bennett, 39, originally from Philadelphia in Pennsylvania, and history teacher James Furlong, 36.

A heart-shaped floral tribute to the three men could be seen outside the Blagrave Arms pub in the town on Monday afternoon.

Alongside the names “Dave, James and Joe”, a note on the door said: “We will never forget you. RIP.”

A message among the flowers added: “Our friends were the kindest, most genuine, and most loveliest people in our community that we had the pleasure in knowing.

“They’ll be forever in our thoughts.”

A minute’s silence for the men was held outside the bar on Monday evening. Ahead of the pause, Jamie Wake, a friend of the victims, told reporters: “I wish I could stand here and say that I can make sense of the senseless. Sadly today, like many others, I can’t.

“We become so used to seeing incidents like this on the television. This time, we cannot change the channel. This time, it’s on our doorstep.”

Mr Wake added: “The LGBT+ community and our allies, here in Reading, are close family, and we’re stood here outside the Blagrave, a place we call home, and a safe space for so many members of our community.”

Mr Furlong was head of history, government and politics at The Holt School in Wokingham, and died after the attack.

Mr Furlong was originally from Liverpool and had taught in the city as part of his career before taking a position at the Berkshire school.

His parents, Gary and Janet, released a statement through Thames Valley Police, which said: “James was a wonderful man. He was beautiful, intelligent, honest and fun.

“He was the best son, brother, uncle and partner you could wish for. We are thankful for the memories he gave us all. We will never forget him and he will live in our hearts forever.”

The second victim has been named locally as American citizen Joe Ritchie-Bennett.

The Philadelphia Inquirer newspaper reported that he was 39 and had moved to England from the US around 15 years ago.

The paper said Mr Ritchie-Bennett had married his husband Ian in 2006. He died in 2014 after being diagnosed with colon cancer.

Paying tribute to his brother, Robert Ritchie, a captain in the Philadelphia police force, told the paper: “I love him. I always have. I always will. He was a great guy.”

US Ambassador to the UK Woody Johnson confirmed an American citizen was one of those killed in the atrocity.

Mr Johnson tweeted: “I offer my deepest condolences to the families of those killed in the attack on June 20.

“To our great sorrow, this includes an American citizen. Our thoughts are with all those affected.

“We condemn the attack absolutely and have offered our assistance to British law enforcement.”

According to tributes posted on social media, Mr Ritchie-Bennett was friends with Mr Furlong, and his Facebook page said he was originally from Philadelphia in Pennsylvania, but had been living in Reading.

A two-minute silence was held at The Holt School and lessons were cancelled for all year groups on Monday to pay tribute to Mr Furlong.

More than 100 students, some holding hands, gathered at the school’s gates as a bell rang out to mark the start of the silence.

A flag in the school’s courtyard had been lowered to half-mast and flowers have been laid at the school gates.

Co-headteachers Anne Kennedy and Katie Pearce also paid tribute and described him as a “kind and gentle man” who had a “real sense of duty and cared for each and every one of our students”.

In a statement, they said: “He truly inspired everyone he taught through his passion for his subject and his dedication. He was determined that our students would develop a critical awareness of global issues and in doing so become active citizens and have a voice.

“As a Holt community, we all now need to absorb this sad news. Counsellors will be available for students and staff.

“Words cannot describe our shock and sadness at this time. Our thoughts are with his mum, dad, brother and family, and his friends and colleagues.

“He was a cherished colleague and he will be sadly missed.”

Mr Furlong was himself educated at St Francis Xavier’s College in Liverpool.

The school paid tribute to him and said in a statement: “James was 36 years old and so it was a long time since he attended our school, but it is still upsetting to hear that an Old Xaverian has died under these circumstances.

“We are all proud of him and it is especially good that James dedicated his life to education and was a remarkable teacher of history and politics.”

He tweeted: “My thoughts are with the families and friends of those killed and injured in Reading. Very sad to hear that a teacher, James Furlong, was among the victims. Tributes paid by his colleagues reflect how much he will be missed.”