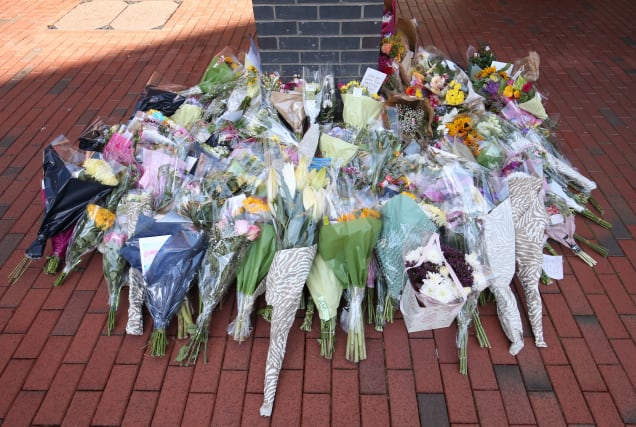 The three friends killed in a suspected terrorist attack in Reading have been described as kind, genuine and the “loveliest” people in the community.

Tributes were paid to Joe Ritchie-Bennett, 39, originally from Philadelphia in the US, history teacher James Furlong, 36, and David Wails who was named locally on Monday afternoon.

A 25-year-old man, understood to be Khairi Saadallah, remains in custody after he was detained a short distance from the scene at Forbury Gardens and arrested on suspicion of murder on Saturday night.

Saadallah, a refugee of the civil war in Libya who briefly came to the attention of MI5 last year, is thought to have been released from prison earlier this month after he was convicted of non-terror offences.

A heart-shaped floral tribute to the three victims could be seen outside The Blagrave Arms pub in Reading, alongside candles and a note which read: “The Blagrave Arms management and staff are devastated at the announcement that the three people who died in the Forbury Gardens attack on Saturday were regular customers and very dear friends of ours.

“Our hearts go out to their family and friends, and the other victims of this horrific incident.”

Alongside the names “Dave, James and Joe”, the text said: “We will never forget you. RIP.”

A message among the flowers paid tribute to the three, adding: “Our friends were the kindest, most genuine, and most loveliest people in our community that we had the pleasure in knowing.

“They’ll be forever in our thoughts.”

“Their loss is a tragedy to so many people,” Martin Cooper, 36, who is chief executive of LGBT+ charity Reading Pride, told the PA news agency.

“They will be sorely missed by myself personally and many in the community.”

Any ideology or motivation behind the attack is still unclear, PA understands.

Saadallah was tackled to the ground by an unarmed police officer close to the scene at Forbury Gardens on Saturday evening and arrested on suspicion of murder.

He was later re-arrested under Section 41 of the Terrorism Act, which gives powers to hold him without charge for up to 14 days.

On Monday detectives were granted a warrant of further detention until Saturday. Police have said they are not looking for anyone else in connection with the attack.

Three people who were injured and treated in hospital had been discharged by Monday evening.

PA understands from security sources that MI5 had received intelligence that Saadallah planned to travel abroad, possibly for terrorism purposes, but the threat was found to be insubstantial and the information provided did not meet the threshold of investigation.

Meanwhile, light has been shone on the fact the number of people on an MI5 watchlist has risen by thousands.

It said as soon as MI5 judged an SOI no longer posed a threat, that SOI was downgraded and placed in a “closed” category called Closed Subject of Interest (CSOI).

“This does not mean these SOIs will never pose a threat again, but merely that their current level of threat is not judged to be sufficient to prioritise allocating investigative resource against them,” the report said.

The report said: “A substantial element of the increase to over 40,000 is the inclusion of individuals who have never travelled to the UK but whose details have been passed to MI5 by foreign intelligence services, in order that MI5 be alerted should they enter the UK.

“This new figure is not, therefore, directly comparable to the previous 20,000 figure and it does not mean there are now over twice as many CSOIs at risk of re-engagement.”

“Nevertheless, by its very nature, the CSOI figure will always increase year on year.

“MI5 is constantly opening new investigations into individuals who come to its attention and then closing SOIs when it is confident it has mitigated any threat they pose.

“Individuals generally remain in a CSOI category unless they re-engage in terrorist activity (in which case they are moved back into a priority investigation), or until a substantial amount of time has passed.

“This inevitably means that more individuals enter the CSOI pool than leave it.”

As counter-terror officers investigate, mental health is understood to be considered a major factor in the attack.

The suspect was jailed in October for a string of non-terror offences before his sentence was reduced at the Court of Appeal to a term of 17 months and 20 days.

One of the appeal judges who gave the judgment in March, Mr Justice Goss, noted Saadallah’s various mental health issues, including post-traumatic stress disorder and personality disorder, in reducing the sentence.

The offences included affray, assault by beating, assaulting an emergency worker, criminal damage, having a bladed article and a racially aggravated assault involving a police officer.