Salmond inquiry witnesses ‘should be questioned under oath’ 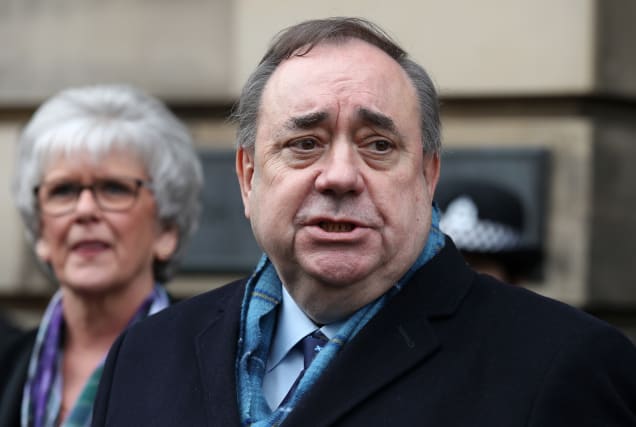 A Holyrood committee set up to investigate how the Scottish Government dealt with harassment complaints made against former first minister Alex Salmond could take the unusual step of questioning witnesses under oath.

He made the plea as the Committee on the Scottish Government Handling of Harassment Complaints met publicly for the first time in an online meeting.

Mr Salmond – who was cleared of 13 sexual offences by a jury in March this year – will be questioned by MSPs, along with his successor Nicola Sturgeon.

Convener Linda Fabiani explained the committee has been set up to “consider and report on the actions of the First Minister, Scottish Government officials and special advisers in dealing with complaints about Alex Salmond, former first minister, considered under the Scottish Government’s handling of harassment complaints involving current or former ministers and procedure and actions in relation to the Scottish ministerial code”.

Mr Cameron said under section 26 of the Scotland Act, and rule 12 of Holyrood’s standing orders, committees can question witnesses under oath.

Arguing for this to happen, he said: “It seems absolutely imperative that the evidence we get is as accurate as it can be, and we need the opportunity to test both its credibility and its veracity, not least because we are likely to get conflicting versions of events.

“And secondly, we are dealing with very serious matters involving the highest echelons of the Scottish civil service and the conduct of very senior ministers past and present.

“Taking sworn evidence underscores the gravity of subject matter of this inquiry and will ensure we get the best possible evidence.”

The call was backed by Liberal Democrat committee member Alex Cole-Hamilton, who said: “There will be conflicting stories and it is vital we have confidence in what we as a committee hear.”

The inquiry is taking place after the Court of Session in Edinburgh ruled in January 2019 that the Scottish Government’s actions in dealing with complaints made against the former first minister were “unlawful in respect that they were procedurally unfair and that they were tainted with apparent bias”.

With the committee having been established in the wake of that, MSPs raised concerns about what Mr Cole-Hamilton described as “very regrettable delays” in getting written evidence from the Scottish Government.

He said: “I don’t think it has necessarily taken our requests as seriously as it might.”

Committee members stressed their desire to be able to meet in person once they start hearing from witnesses.

Labour’s Jackie Baillie suggesting meeting in Holyrood’s chamber instead of one of the committee rooms as social distancing requirements are likely to still be in place in August.

She stressed: “I don’t think the work of this committee can be conducted on a virtual basis.”

That was echoed by SNP MSP Angela Constance, who said: “My preference has always been not to be questioning witnesses remotely or online.

“I just think that is particularly problematic, I would want to do that in person.”

Mr Cole-Hamilton said: “It is almost impossible to take what is possibly quite sensitive, quite controversial evidence, in a format like this.”

MSPs also said they are keen to meet regularly once they start hearing evidence.

Scottish Greens co-leader Alison Johnstone said: “I would like us to meet weekly, at the very least.

“I think we may be able to work more efficiently if we were to meet more frequently.”

Ms Sturgeon has already pledged to give evidence to the committee if she is called as a witness, saying in January 2019: “As First Minister I don’t consider it optional to me whether or not I appear before parliamentary committees, that is a part of my job and a part of my responsibility.”

She has also referred referred herself to independent advisers who will consider if she breached the ministerial code during meetings and phone calls with her predecessor.