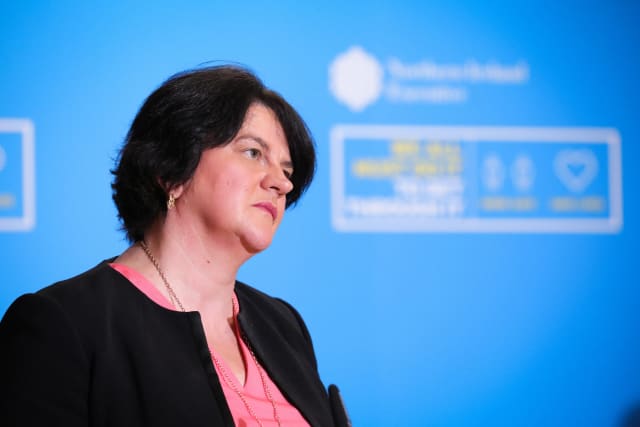 First Minister Arlene Foster said the Stormont Executive will engage with the UK Government around its plans.

Prime Minister Boris Johnson is expected to make announcements around this issue on Tuesday.

There have been calls from the hospitality sector to make the reduction from two metres to one.

“We will be engaging with the Westminster Government tomorrow to find out what the evidence base is for all that.”

Deputy First Minister Michelle O’Neill added: “We have always said we will keep this issue under continual review, that remains the case all the while guided by our own scientific and medical officers’ advice.”

“The advice today from both the chief scientific officer and the chief medical officer was that we’re in a position where we should be strongly recommending face coverings, and particularly in circumstances where you can’t socially distance or the room isn’t well ventilated, or indeed public transport,” she said.

Mrs Foster added: “People also need to bear in mind if they are wearing a face mask they’re not immune from either transmitting or indeed catching the virus. One of our concerns is that people become quite complacent when they wear a face mask because they think it is some sort of barrier to the disease, and of course it’s not. It’s an aid to help stop the disease but it is not a barrier.”