Manchester shootings: Police vow to find those behind ‘barbaric’ murders 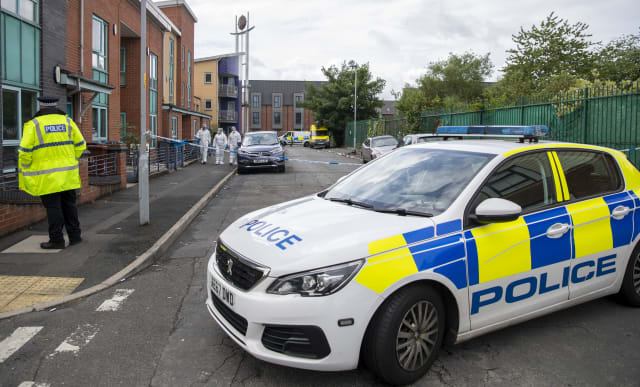 Police have vowed to find those responsible for the “barbaric” murders of two men gunned down at an outdoor lockdown party in Manchester.

A 36-year-old-man and a 21-year-old man both died in hospital after reports of gunfire near Caythorpe Street, Moss Side, at about 12.55am on Sunday. The shootings took place at what the police termed was a “spontaneous gathering” which followed a separate organised community event in Moss Side that ended between 7pm and 8pm.

Concerned members of the public rang police between 10pm and midnight to complain about noise as people moved into a residential courtyard.

Police say they monitored the impromptu event but had no intelligence of any criminal activity or that violence was planned, and later decided it was “unachievable” to safely disperse.

No arrests have been made as detectives urgently appealed for anyone with information about the shootings to come forward. Assistant Chief Constable Chris Sykes, of Greater Manchester Police, said: “Two men have been killed in the most brutal and horrifying way. This is our absolute top priority and our focus will remain on the investigation and finding those responsible for this barbaric act.

“We will continue to support the men’s loved ones and we have family liaison officers supporting them at what is an unimaginably difficult time. We will offer them as much help as we possibly can and continue to focus our efforts in seeking justice for them.

“We’ve also been working closely with the community who are quite understandably shocked and saddened by this news and know that this horror is not a reflection of the community and its values.

“We do know that there were a lot of people in and around the area at the time of the shootings. These people are all vitally important witnesses and we would make a direct appeal to anyone who may have information to please get in touch. We understand that people may have reservations about coming forward due to the current coronavirus circumstances, but we would implore you to search your conscience and do the right thing.”

He conceded there had been a “level of concern” around the gathering and the force’s response.

Mr Sykes said: “We have to deal with everything proportionately based on the information we have at that time. We are obviously trying to work with a community that felt it has been cooped up for many months. People want to go out there and protest, and some celebrate, and some see their family. There is no nightlife to go out to. This is the period of time when people would have been going out to festivals, concerts, carnivals, barbecues.

“Seeing these sort of spontaneous things happening across Greater Manchester is what we are seeing at the moment and you will have seen it across the country with lots of spontaneous gatherings and groupings of people in all sorts of open places. We have just got to deal with them as each one on their own merit.”

He said the decision was made that it was “unachievable” to safely disperse the group in Moss Side which he said at the time was in its “tens and tens”, rather than hundreds. He said he accepted some people might have gone from the organised community event to the “spontaneous gathering”, which police and Andy Burnham, Mayor of Greater Manchester, say was not a rave.