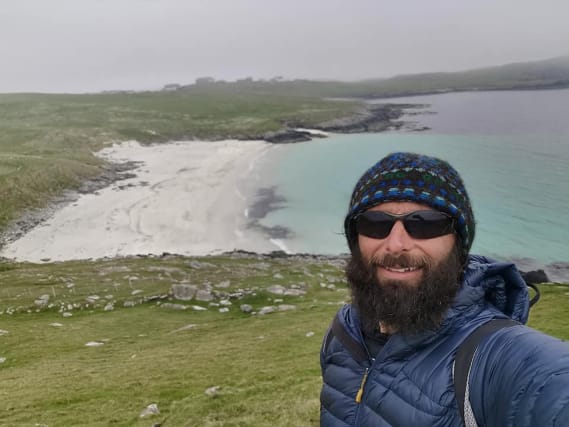 A former British paratrooper has restarted his walk of the UK coastline after isolating on a previously uninhabited island since lockdown began.

Chris Lewis, 40, had walked 12,000 miles since setting off from Llangennith beach on the Gower Peninsula, near his home city of Swansea, South Wales, in August 2017.

He was sleeping in a tent on mainland Shetland when the UK Government announced lockdown restrictions on March 23 to limit the spread of coronavirus.

Mr Lewis and his dog Jet were taken to Hildasay, a 108-hectare island off the west coast of the Shetland mainland, by boat and given permission to live in the only house there.

They stayed in the former shepherd’s hut, which has no running water, heating or electricity, for months.

On Friday, the pair left Hildasay and resumed their walk around the UK coastline, which they are carrying out to raise money for SSAFA, the Armed Forces charity.

“As we left the pier I sat at the back of the boat not really able to say much,” Mr Lewis wrote on Facebook.

“I was sad, and excited at the same time. What an adventure the past three months have been living on our own island during lockdown. I will never forget it.

“I feel I left a part of me behind when I left and look forward to my return in years to come.”

Mr Lewis said he had received “frankly outstanding” support from locals who carried out regular food and coal drops by boat when weather allowed.

People following his journey have also sent money to the local shop in Burra, as well as gifts, letters and cards, to be passed on.

“I could go on and on with acts of selfless kind gestures from people I’ve never even met,” Mr Lewis continued in the post.

“It’s amazing how people simply just want to be kind and help whatever way they can.

“It’s incredibly good for the soul. Leaving Hildasay means more than just leaving the island to me.”

He is now hoping to raise £200,000 for SSAFA, which supported him after he left the forces.

During his stay on Hildasay, Mr Lewis collected driftwood, foraged and fished for food – always making sure he had a three-week supply of dog food for Jet.

The island had been uninhabited since the late nineteenth century, with just 15 sheep and thousands of birds making it their home.

More than 50,000 people have been following Mr Lewis’s journey on a Facebook page, Chris Walks the UK.

Mr Lewis struggled to cope after leaving the Parachute Regiment and found himself homeless.

He set off from Llangennith beach on the Gower Peninsula with just £10 in his pocket and a few days of supplies.