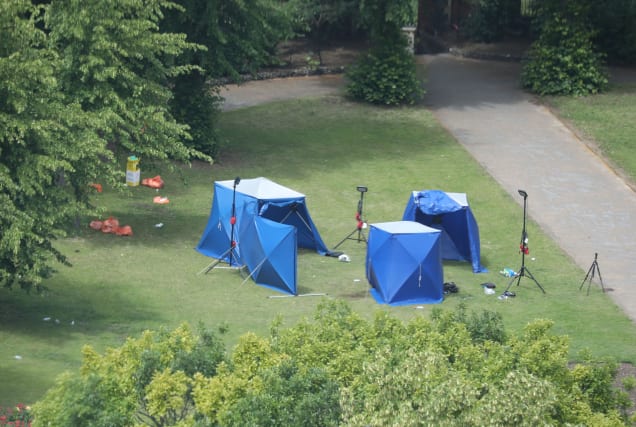 The triple murder in Reading on Saturday night could prove to be the third terrorist attack on UK soil since the threat level was downgraded in November.

Counter-terrorism police have taken over the investigation into the incident, although one of the UK’s most senior officers has said the motivation for the killings are “far from certain”.

Three other people were injured in the attack, although one has since been discharged from hospital.

The UK’s terror threat level was downgraded from “severe” to “substantial” on November 4 – its lowest level since 2014.

Home Secretary Priti Patel said at the time that terrorism was still one of the most “direct and immediate” risks to national security.

Less than a month later, two people were killed in an attack by a convicted terrorist.

Saskia Jones, 23, and Jack Merritt, 25, died when 28-year-old Usman Khan stabbed them at a prisoners’ rehabilitation event at Fishmongers’ Hall by London Bridge.

Khan, who was shot dead by police, had been jailed in February 2012 for his part in an al Qaida-inspired plot to bomb the London Stock Exchange.

On February 2 this year, Sudesh Amman – who also had terrorism convictions – was also shot dead by police after stabbing two people in the street in Streatham, south London, while wearing a fake suicide vest.

The head of counter terrorism policing, Metropolitan Police Assistant Commissioner Neil Basu said on Sunday there was no intelligence to suggest anyone attending crowded places is at risk.

He said: “Please continue with your daily lives, but be alert, not alarmed, when you are out in public.

Experts had previously warned of a risk of greater numbers of people becoming radicalised during lockdown as they spend more time online and socially isolated.

Lucy D’Orsi, Deputy Assistant Commissioner for the Met, told the PA news agency last week: “As we come out of lockdown, I think it is really important to remind people that the threat level from terrorism remains at substantial, which means an attack is likely.”

Ms D’Orsi said: “We’re all going to look forward to going back to crowded places, iconic locations. I would just really ask that people stay alert as they were before.”

She added: “We just need the public to stay alert and play their part in national security, to create a hostile environment for terrorists to operate in.”