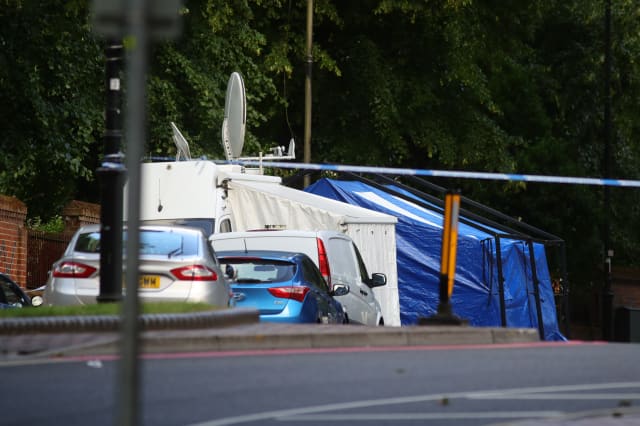 A terror suspect remains in custody accused of killing three people in a Reading park on Saturday night and wounding three others.

The 25-year-old man, understood to be named Khairi Saadallah, was detained a short distance from the scene at Forbury Gardens and arrested on suspicion of murder.

He was later re-arrested under Section 41 of the Terrorism Act, which gives police the power to detain him without charge for up to 14 days.

School teacher James Furlong, 36, is the only victim to be named so far.

Two of the injured remain in hospital, while one has now been discharged.

It emerged on Sunday the suspect, a refugee of the civil war in Libya, briefly came to the attention of MI5 last year, but the information provided did not meet the threshold of investigation.

A security source said M15 had received intelligence he planned to travel abroad, possibly for terrorism purposes, but the threat was found to be insubstantial.

As counter-terror officers investigate, mental health is understood to be considered a major factor in the latest incident.

Police have said they are not looking for anyone else in connection with the attack.

Prime Minister Boris Johnson said he was “appalled and sickened” by the incident and said “we will not hesitate to take action” if there are lessons to be learned from the circumstances.

The suspect was jailed in October for a complex series of non-terror offences before his sentence was reduced to one of 17 months and 20 days’ imprisonment in the Court of Appeal.

One of the appeal judges who gave the judgment in March, Mr Justice Goss, noted Saadallah’s various mental health issues in reducing the sentence in March.

Tributes from former students of Mr Furlong poured in after a letter from the two co head teachers at his school – the Holt School in Wokingham – announcing his death was circulated online.

His parents Gary and Janet, said in a statement: “He was the best son, brother, uncle and partner you could wish for.

“We are thankful for the memories he gave us all. We will never forget him and he will live in our hearts forever.”

Mr Hadyoon told reporters the man had not resisted the officers, adding: “To me it looked very weird because he didn’t say a word. He didn’t care, he was just staring… he was just completely silent.

“He wasn’t even blinking, he looked really weird.”

Personal trainer Lawrence Wort, 20, who said he was around 10 metres from the incident, told PA on Saturday night the suspect was alone and “shouted some unintelligible words” before launching the attack.

“He went around a large group of around 10, trying to stab them,” he said.

Thames Valley Police have pleaded with the public not to share any pictures or images of the killings on social media, and instead contact them on 101, or upload the footage to UKPoliceImageAppeal.co.uk.

Despite treating the incident as a terror attack, Metropolitan Police Assistant Commissioner Neil Basu said on Sunday the motive is still “far from certain”.

Mr Basu said there was no evidence to suggest anyone attending crowded places is at risk, but asked people to “be alert, not alarmed, when you are in public”.