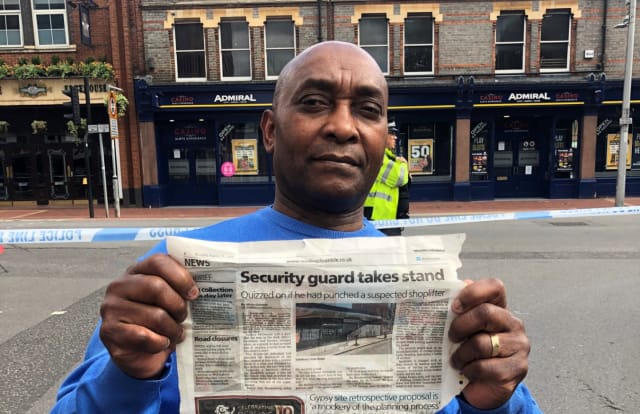 A security guard who saw the Reading terror suspect being rugby-tackled to the ground by police has described how it looked as if he had put his hands “in a big bucket of red paint”.

Sydney McDonald, 65, told the PA news agency: “I had just finished work at about 7.10pm and as soon as I came out of the shop, there were about four police cars, they turned around in the middle of the road, they were driving pretty fast.

“There was a guy and I saw him pointing to a man and saying ‘There he is, there he is’. If he hadn’t, they would have missed him.

“They put the emergency brakes on, jumped out of the car and rugby-tackled him to the floor.

“He was on his stomach and the blood on his hands looked like he had put his hand in a big bucket of red paint.

“They put the handcuffs on, he wasn’t putting up a fight or anything like that, they picked him up and put him in the van, he just sat there all quiet, he wasn’t saying nothing.”

I am sure he is the same bloke, he’s grown a beard but he’s the same height, same build, same age, same everything

As well as witnessing the arrest on Saturday, Mr McDonald says he had previously been assaulted by the suspect last year when he stopped him from shoplifting from the Sainsbury’s store where he works in Friar Street in Reading town centre.

Mr McDonald said he recognised the man from when he had attacked him in January 2019 by rushing at him with a broken wine bottle and whipping him with a belt.

He said: “I am sure he is the same bloke, he’s grown a beard but he’s the same height, same build, same age, same everything.”

Describing the previous incident, Mr McDonald said: “When he attacked me outside the shop he broke a bottle and threatened to stab me and I defended myself. I put him to the floor, held him there … and he couldn’t get away from me and I held him until the police came.”

He added: “If I couldn’t have defended myself he probably would have killed me. But I knew how to handle it.

“He pulled the bottle of alcohol out that he had nicked from Sainsbury’s then he smashed the bottle and came at me. He punched me in my face and I hit him back, his nose was bleeding. I kept him down on the floor until the police came.

“I thought he had a knife because of the way he was behaving.”

The suspect was charged with affray, assault by beating and two counts of having an offensive weapon, according to a report of the case in the Reading Chronicle.