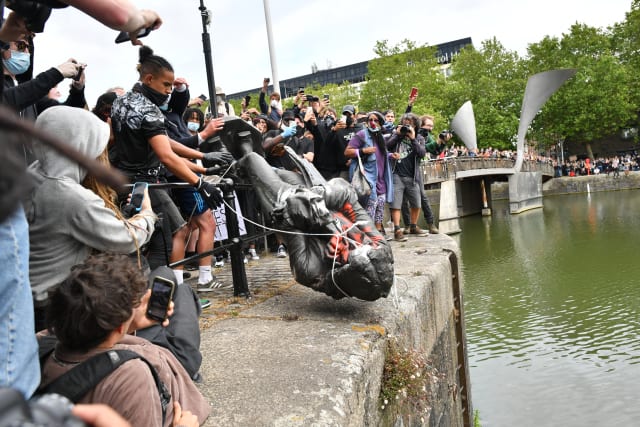 Detectives investigating the toppling of the statue of slave trader Edward Colston during a Black Lives Matter protest have released images of 15 people they wish to speak to.

The monument to the 17th century merchant was pulled from its plinth in Bristol city centre with ropes at about 2.30pm on June 7.

It was sprayed with paint and attacked before being dragged to the harbourside, where it was thrown into the water near Pero’s Bridge – named in honour of an enslaved man.

Officers from Avon and Somerset Police made a tactical decision not to intervene at the time but launched a criminal damage investigation a short time after.

The force has identified 18 people that officers want to speak to about the incident, with images of 15 of these released on Monday.

Detective Superintendent Liz Hughes said: “The incident attracted worldwide attention and there’s no denying it has polarised public opinion – but in the eyes of the law a crime has been committed and we’re duty-bound to investigate this without fear or favour.

“I’d like to reassure people we’re carrying out a thorough, fair and proportionate investigation and have sought early investigative advice from the Crown Prosecution Service.”

It is understood that Bristol City Council has provided a statement to police about the incident.

The council retrieved the statue, which will be displayed in a museum along with placards from the Black Lives Matter protest, from the harbour on June 11.

Det Supt Hughes said a “large amount” of video footage and images circulated online and on social media, as well as footage from CCTV cameras, had been examined as part of the investigation.

“We’ve made a small handful of identifications and we’ve spoken to some of those individuals,” she said.

“They will be coming in for voluntary interviews in the coming days.

“However, despite every effort being made to identify the remaining people we’d like to talk to, we still don’t know who they are which is why we’re now releasing images of them in the hope the public can help.

“Some of the images are not as clear as we’d like, and some of those we want to identify are wearing masks but we’re confident someone will know them and be able to provide us with their name.”

Anyone with information is asked to contact the force on 101, providing the reference number 5220123926, or anonymously via the charity Crimestoppers.