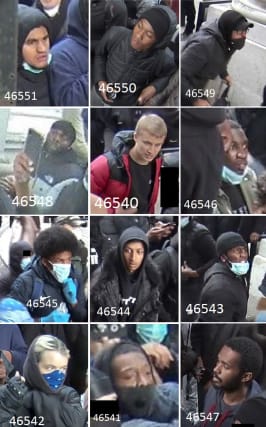 Police have released another 12 images of suspects allegedly caught up in violent clashes at protests over the past few weeks.

At least 100 officers have been injured policing Black Lives Matter demonstrations and counter-protests staged by the far right since late May.

The protests were sparked by the killing of George Floyd, a black man, in the US state of Minnesota when a police officer knelt on his neck for almost nine minutes.

Three police horses and a police dog also suffered injuries, and almost 300 people have been arrested.

The Met has previously released 48 images of those thought to have been involved in criminality, and on Saturday published the 12 additional photos.

The individuals are suspected of offences from racial abuse and serious violence against members of the public and police officers, and also violent disorder.

Commander Alex Murray said the force had seen a positive response to the appeal from the public.

He said: “The vast majority of people who have attended the recent protests made their voices heard, and then left.

“However, a minority have attended with the sole purpose of attacking, abusing or violently confronting fellow protesters, detracting from the cause of their protest.

“We saw violence against police officers including verbal and racial abuse which is absolutely appalling.

“Similarly, those people who wanted to have their voices heard and protest should not be subject to violence from others.

“Whilst investigations are underway to identify those we suspect of being involved in these offences, we ask members of the public to make it clear that they also will not tolerate such behaviour by helping us to identify these individuals and report anyone they recognise in the pictures.

“Thank you to those who have already helped to identify people from the images – your help is having a real and positive effect on our investigation.

“Thank you also to those people who have actively challenged other protesters to stop them being violent and abusive.”

People with images or video of any incidents at the protests can share it with police via ukpoliceimageappeal.co.uk citing the investigation “Operation Minorca”.