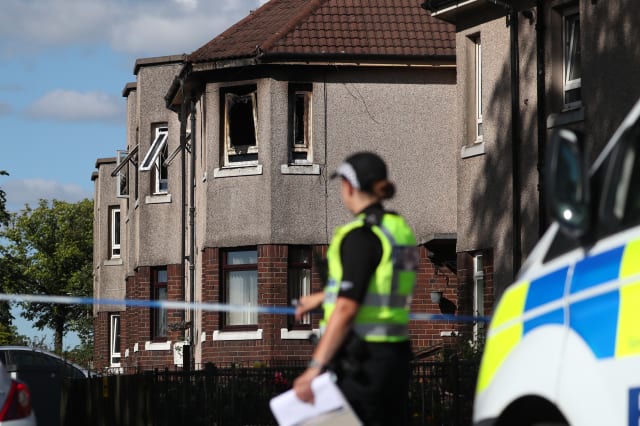 Flowers and cuddly toys have been left at the scene of a fatal flat fire in Renfrewshire, which has claimed the lives of three siblings.

Emergency services responded to a report of a blaze at the first floor property on Renfrew Road, Paisley, at around 9pm on Friday.

Fiona Gibson, 12, and her brothers Alexander James, eight, and five-year-old Philip were taken to the Queen Elizabeth University Hospital in Glasgow.

However, they died a short time after being admitted.

A 39-year-old woman was also taken to Paisley’s Royal Alexandra Hospital, where she is in a critical condition.

The smell of smoke still surrounded the scene at the Gallohill housing estate on Saturday as people left tributes by the police cordon.

One woman passerby said local people were left “shocked” by what happened and simply added: “God bless those weans.”

Among the flowers left at the scene were some from Gavin Newlands, MP for Paisley and Renfrewshire North, who wrote on a card: “We are all so sorry for your heartbreaking loss.

“Our thoughts and prayers are with you all.”

She tweeted: “No words are enough. It’s just heartbreaking. My thoughts are with all who loved these poor children.

“Fiona, Alexander and Philip – may you rest in peace.”

The Scottish Fire and Rescue Service previously told the PA news agency six fire crews were met with a “well developed” blaze in a first-floor property.

Plain clothes police officers carried out inquiries in the area while teams in white protective suits could be seen in and around the flat.

A police spokesman said: “An investigation is under way to establish the exact circumstances of this incident.

“Anyone who has information that could assist our enquiries should contact police via telephone number 101 quoting incident number 3669 of 19 June 2020.”