Protesters kettled after converging on George Square despite police warnings 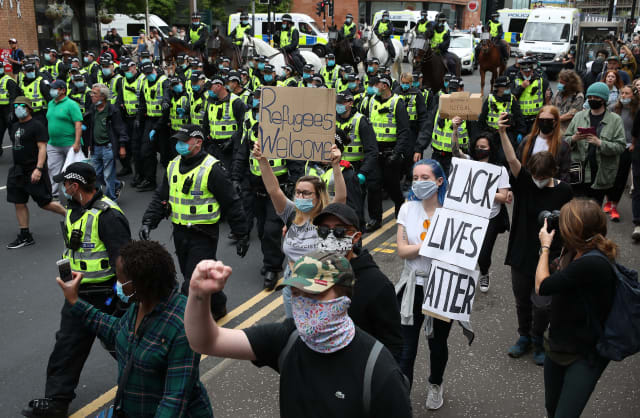 Hundreds of anti-racism protesters gathered at a rally in Glasgow city centre despite being warned by police to stay away.

Organisers said the Glasgow Says No to Racism event is aimed at “sending a positive anti-racist message from Glasgow’s George Square to the world on World Refugee Day”.

More than 500 people attended the rally, with stewards asking them to stick to social distancing guidelines by following markings on the square.

They had also been asked to wear masks and not to travel farther than public health advice allows.

Police vans lined the square, with more than 100 officers in attendance, including riot police and mounted officers.

Police horses and riot officers were used to control their arrival in the square and when the event ended around noon they were kettled before being moved through the city, controlled by police horses and scores of officers.

Loyalists and members of a far-right group announced online on Friday night that they planned to head to the square to “protect statues”.

A small group gathered at the war memorial during the rally as lines of riot police separated the two.

At the start of the rally, the crowd took a knee in support of the Black Lives Matter movement.

Later, names of people who died in police custody were read out and attendees chanted “no justice, no peace, no racist police”.

Speakers said they “didn’t come here for a fight” and spoke of securing greater rights for refugees and asylum seekers.

They added “no-one welcomes” the far-right group and called on police to “do their job”.

There were some minor scuffles as police controlled people arriving and leaving but the rally was peaceful.

Protesters being kettled and moved on questioned officers over why similar had not happened to a far-right group involved in violent scenes at the square on Wednesday.

Police Scotland, Justice Secretary Humza Yousaf and the head of Glasgow City Council Susan Aitken had called on the public not to gather at George Square this weekend.

“The lockdown restrictions remain in place and people should leave their homes only for very limited purposes.

“Anyone who wants to protest should find another way of doing so that keeps everyone safe.”